How to Ride at Night - Rookie to Rider 9 by Courtney 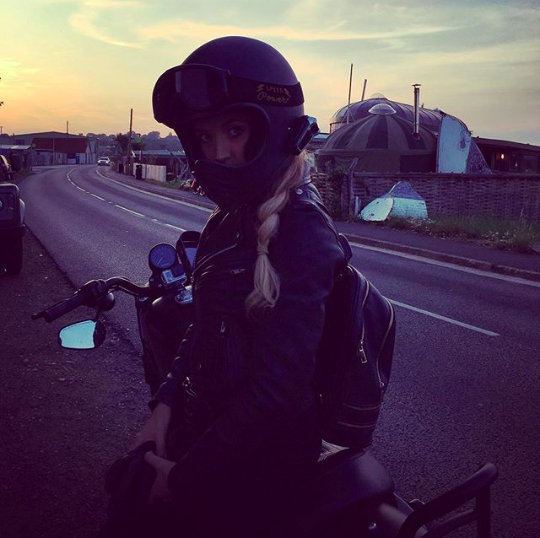 The ninth part of the Rookie to Rider Series can be found below. Enjoy!

Riding at night can feel like riding in a videogame – it can be thrilling and give you a whole new perspective of your environment. At night, however, you can be almost invisible to other road users and it can be more challenging for you to notice potential dangers.

If you commute by motorcycle in the winter then you will be no stranger to riding in the dark, but even if you’re a fair-weather biker it’s always best practice to know how to handle any environment on your machine – including night riding.

So, let’s start with your own visibility first. At night you need to be more aware of your surroundings as it can be extremely difficult for other road users to see you. Wearing reflective clothing or panels (on the bike or on your clothes) can be one of the best things you can do to stand out on the road. All road-legal bikes will have a headlight, but if you’re on an older model or the light has dimmed over time, it may be worth investing in a new headlight as well.

It may seem obvious not to wear a dark visor out at night, but sometimes you just end up coming home later than expected after a sunny day’s ride, and believe me when I say that riding in a blacked-out visor at night is not something you want to experience for yourself if you can help it! It’s always worth bringing a spare clear visor along for the journey just in case.

Also remember that the temperature will drop significantly while riding at night. When packing your clear visor, throw some glove liners and a face/neck warmer in your kit too – you won’t regret it!

Quiet country roads throw a whole new host of issues your way when riding at night. Nocturnal animals darting across the road can be a heart-stopping experience – deer, stags, rabbits and squirrels will all love to surprise you down a country lane in the dark. Unfortunately there’s nothing you can do to prevent it, besides be aware, lower your speed slightly, and do your best to react in the calmest possible manner to keep yourself, other road users and the animal itself out of harm’s way.

Sometimes, it’s simply other road users that can be just as unpredictable at night. Drink drivers are more likely to be out on the road, as well as very tired, drowsy drivers! If you see a car swerving, it’s best to keep as far away from it as you can and only overtake if you can do so safely and leave plenty of room. There will always be road users who regrettably don’t look out for motorcyclists and, with it being so much harder for them to see you at night, you really must assume you can’t be seen and therefore need to ride accordingly!

It should go without saying but I’ll do it anyway: if you’re tired, don’t ride. It really IS possible to fall asleep, even on a motorcycle – and at night you really need your reaction time to be at its best.

Another hidden surprise at night can be potholes and poor road conditions. If the road isn’t well lit, you can sometimes catch yourself hitting bad terrain that you would have been able to avoid during the day. Anticipate poor road conditions by riding a little slower, especially down country lanes.

Adapting to the Dark

Judging corners can be a different ball game at night. In general, good practice is to focus on the lines on the road to help guide you. But in circumstances where you can’t see the lines, it’s better to slow down and give your eyes a few extra seconds to adjust, assess the corner and get around it safely.

The takeaway here is that riding at night is a fun and exciting way of experiencing your motorcycle: with less traffic on the roads comes a new type of freedom. But you have to adapt to the dark – stand out as much as you can with reflective gear, ride as though you’re invisible to other road users and be hyper-alert to your surroundings. Once you’ve mastered keeping yourself safe, then the night can be your very own videogame!

Read more of the Rookie to Rider Series by Courtney: