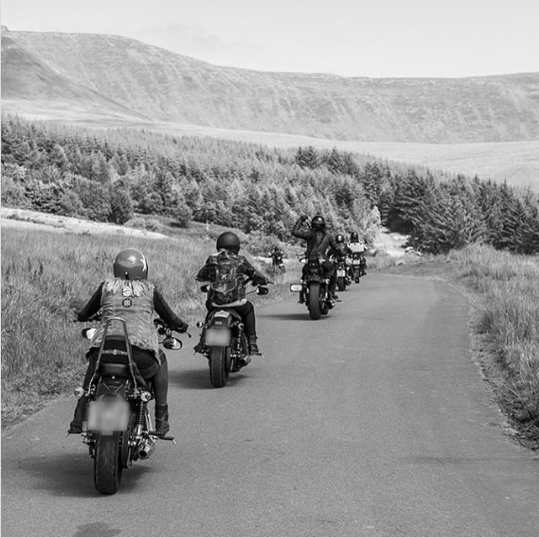 The eighth part of the Rookie to Rider Series can be found below. Enjoy!

Motorcycle riding can give you a great sense of freedom and independence. For a lot of bikers, that alone time in your helmet can be a great way of “getting away from it all”. But, riding with your friends or as part of a big group can be just as rewarding and relaxing – perhaps even better than going it solo.

In the past I’ve enjoyed leading group rides as well as being a part of them – and while they’re equally satisfying, make no mistake, they are very different experiences! The leader of any group ride will ideally always be the most experienced, and preferably someone who knows the route well. (It’s not much fun following a leader who is going around in circles!)

The rider nominated to be at the back (or “tail rider”) should also be one of the more experienced riders, as they are most likely to get separated from the group and will need to help other riders catch up safely.

As gratifying as it is to be in control of your ride, it can be really enjoyable to relax and just follow the riders ahead of you – blissfully cruising behind and not being held accountable for the navigation!

All of this should be pre-determined – along with the route and agreed petrol stops – in a pre-ride meeting or talk. It’s important that everyone on the ride knows who the leader and tail riders are, the final destination, the route to get there and what stops are planned along the way.

Top Tip: Agree on some basic hand signals before the ride – that way you can communicate with each other if you suddenly run out of petrol or need to pull over.

Straight and curvy sections of road will mean you need to adapt your formation while riding in a group. In the straight, a staggered formation is best. The leader should take the right third of the lane in order to see oncoming traffic and past any vehicles in front. The rider behind them should position themselves in the left third of the lane, leaving a safe gap of at least one second between them and the rider in front. The third rider should then be staggered safely behind the leader (at least two seconds behind) in the right third of the lane, and so on.

In curvy sections of road, it is safest to ride single file, allowing a safe distance in between each rider. Motorcycles should avoid riding directly alongside one another, as this doesn’t allow enough room to move aside for hazards.

At one point or another, the group will inevitably get split up. Whether it’s due to traffic lights, roundabouts or other road users moving into the same lane, a large group of motorcyclists will rarely be able to stay in formation throughout a journey.

It’s best to have an agreed plan of action before you set off. But generally, it’s good to keep an eye on the motorcyclist behind you. If you see they’ve got separated, then the leading group can either slow down while remaining on the agreed route – allowing them to catch up or, when a safe opportunity arises, pull over and wait.

Occasionally on large group rides, a more experienced rider who knows the route may find it easier to pull over in safe spots after traffic lights or roundabouts, so they can direct the remaining riders where the group has gone. They will stay there until they see the tail rider to ensure that everyone has kept together and rode in the correct direction.

There will often be times when the group needs to overtake another vehicle, so it’s important to know how to do this safely. Each motorcycle should take it in turns to move into the right third of the lane and then pass the vehicle one bike at a time. Once ahead of the vehicle in front, they will need to speed up enough to allow a safe gap for the next rider to overtake as well.

It’s vital to always allow enough room between riders on big group rides, as this is most often the cause of accidents within the group. (Take it from personal experience, the only time I’ve ever had a motorcycle go into the back of me was during a large group ride!)

In general it’s good to be mindful and respectful of all the different experience levels of riders within a group, and cater for this accordingly. Keep an eye on your fellow biker – if you see someone struggling to keep up, slow down a little so the group can remain together.

Remember you have different petrol tank capacities, so if you have a smaller tank ensure you make use of each petrol stop to avoid getting caught out later down the line. Aim for one first aid kit and toolkit within the group for emergencies too, and bring your mobile phone in case you really do get split up from the group!

Someone once told me to “ride for you” and I’ve found this to be great advice. Don’t push yourself to keep up with the group – go at your own pace and skill level. If you get split up, don’t do any risky manoeuvres trying to keep up. Just stay calm and keep going – you will eventually find the rest of the group even if you do get yourself a little lost.

As most bikers know, big group rides will often result in long-term friendships and great memories. So whether it’s with a group of friends or a large ride full of strangers, my advice is to get out there and enjoy group riding!

Read more of the Rookie to Rider Series by Courtney: