5 Step Guide to Getting Your Motorcycle Licence

The road to getting your motorcycle licence can be a confusing and daunting prospect.

There are a lot of things to think about and consider and, when you couple that with the additional need for riding gear and equipment, many people often give up before they’ve even started.

Here at RideTo, we love motorcycling and truly believe that it’s one of the greatest things a person can do… So here is our foolproof, never-give-up guide to getting yourself a motorcycle licence. 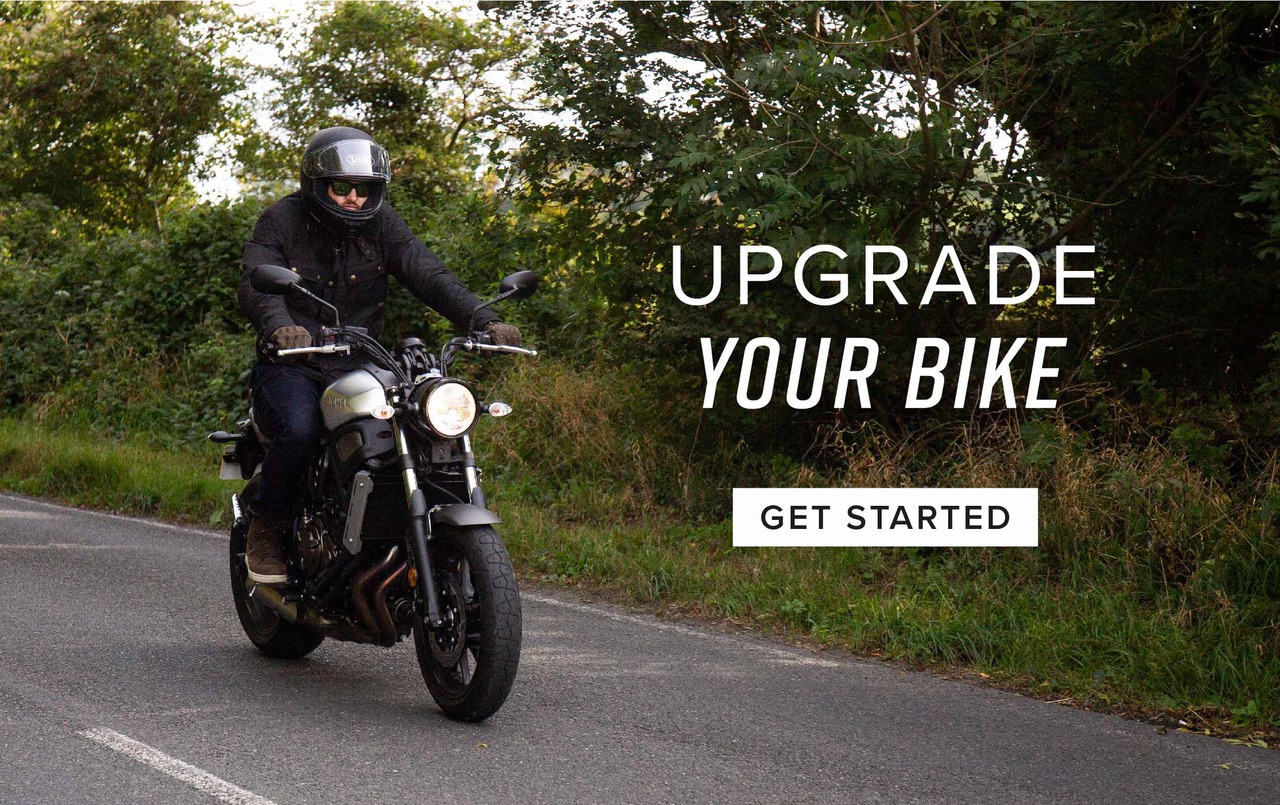 Not Sure Where To Start?

Step 1: Decide what kind of bike that you want (or are able) to ride.

If you’re under the age of 24, then here in the UK there are specific engine size and power laws that dictate what kind of motorcycle that you’re able to ride. The rule of thumb is that if you’re over 24 you can pass a test to ride pretty much any size engined motorcycle that you want (1000cc Sports bikes, or large 1200cc adventure tourers etc).

But that might not be what you’re after - or what you need… So take some time to consider what it is that you want from a motorcycle and how you will be using it.

It could be that perhaps you only need a bike to get you the few miles into town and the train station for your daily commute; and if that’s the case, do you really need to know how to control a larger-engined machine?

Perhaps just the basic CBT (Compulsory Basic Training) and a set of L-plates for two years is all that you need.

You now that old saying ‘choose your horses for courses’? That equally applies for motorcycles too!

Of course we’re bound to say this, but the value of quality training cannot be overemphasised. Whether you’re looking to just ride a scooter through town, or a sports bike for track days, there are plenty of quality schools across the entire reach of the UK and Ireland who can teach you to handle a bike correctly.

And at RideTo we pride ourselves in only working with the best rider training school in the business.

Why is paying for a riding school important? That’s simple… By getting your training from a qualified instructor you can be sure that a) you’re going to be as safe as possible on the road by learning the best way to ride, but also b) you will be taught by somebody whose job it is to get people through their motorcycle riding tests; so not only will they be teaching you to ride, they’ll be teaching you to pass! And that could potentially save you hundreds of pounds in the long run.

Even if you’re just looking a few miles in and out of town, you’ll need to sit through a day long CBT session before you’re allowed onto a road - with L-plates of course.

This is a simple half-day of learning to control the throttle, steering and brakes on around a closed-off piece of tarmac, followed by a few hours riding - under instruction - a 125cc or smaller bike around your local roads. By the end of the day - if the instructor things you’re safe and able - you’ll be given a certificate that’s valid for two years. This certificate means that you can slap some L-plates onto a 125cc engine-sized bike or below and ride on the streets. Read more about the CBT Course.

(Note: If you’re 16 years old or younger you are only allowed to ride a 50cc (or equivalent) bike until you reach the age of 17 (where you can then ride a 125cc or equivalent machine). 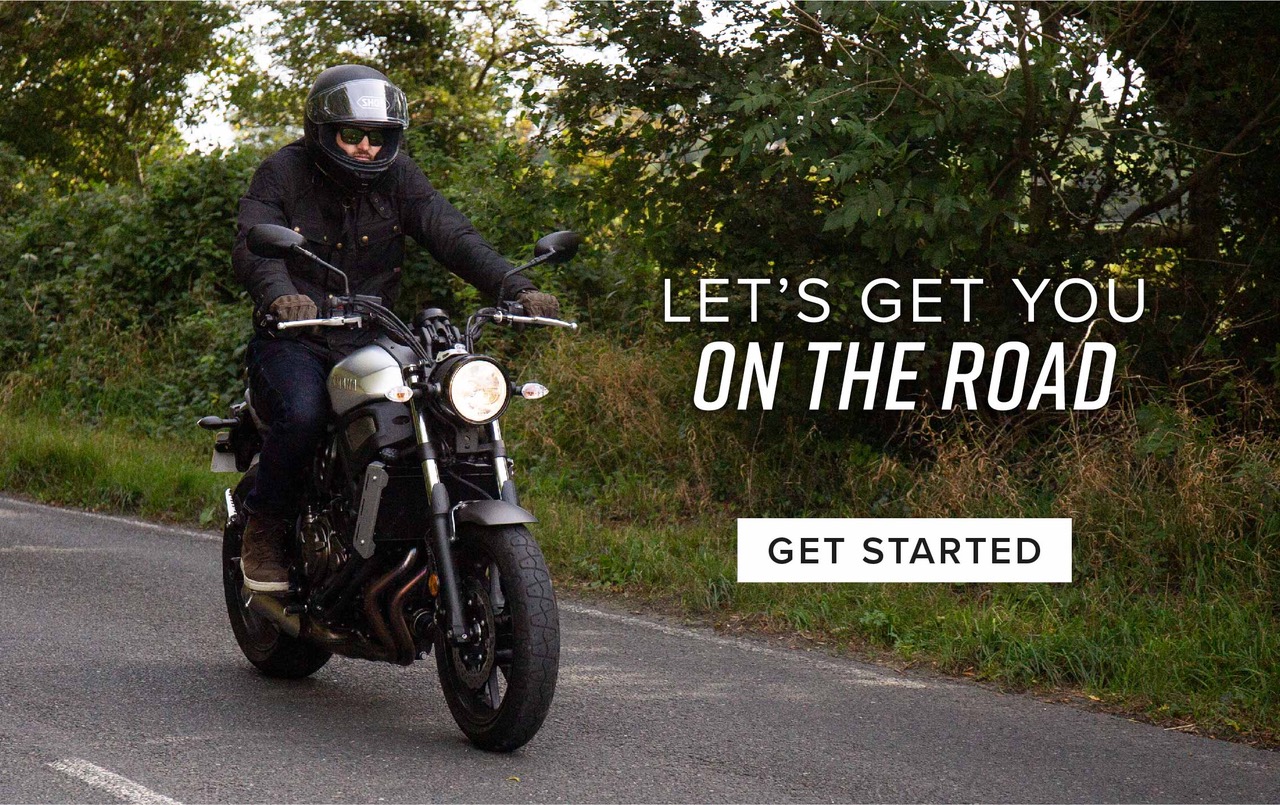 There are literally hundreds of apps and websites that will show you what kind of questions that you’ll be asked for your riding theory tests and we recommend anything that has been endorsed by the DVLA.

You can expect to have learned the basics of road signs and safety as shown in the Highway Code - so you know when you’re riding in a 30 mph zone or that you need to have working brake lights etc - but you’ll also be tested on your ability to spot problems whilst on the road… This is the Hazard Perception test.

For this test, you’ll be sat in front of a computer monitor that shows you a few video clips, and you’ll be told to click the attached mouse button every time you see what could potentially be a hazard to your riding. Think of it as a very slow-paced video game - but don’t get trigger happy; only click when you see a potential hazard in the video and then again when that potential hazard develops itself into a real one.

It’s a bit of a weird and complicated mechanic to explain in a web article, so we really do recommend checking out YouTube for some example videos or spending a couple of pounds on an official app. It’ll pay for itself when you enter the theory testing room confident and familiar with what to expect.

The ‘big bike’ moniker is not strictly, factually accurate, you can pass a full test on a 125cc motorcycle or scooter if you’d like - but generally taking the ‘full motorcycle licence’ means that you’re looking to ride any sized motorcycle on the roads.

The practical test itself will be split into two parts; an off-road test and an on-road test.

For the off-road test you will be required to complete a set number of manoeuvres and ride specific courses marked out by cones - all of which will be covered in your motorcycle training prior to the actual test, so you’ll know exactly what to expect.

The official list of manoeuvres is as follows (with our descriptions underneath):

Because riders are expecting to pull on a brake or to ‘avoid a hazard’ (literally a cone in the way) at the end of it, most people on the test fail to get up enough miles-per-hour on these last tasks. But in order to pass you’ll have to be riding at a minimum speed of 31mph. Go any slower than that it’ll be a fail… So ride confidently and remember everything your instructor has told you. No guts, no glory etc!

Once you pass the off-road module, you will move onto the on-road section, where you will be assessed on your ability to ride on the road with other traffic.

You will also be required to perform certain manoeuvres while on the road, such as pulling away from behind a parked car and a hill start - if possible.

To start with the examiner will ask you to read a number plate of a car or bike approximately 20 metres or so away - so don’t forget your glasses or contact lenses if you need them.

Assuming you’re not riding blind, then the rest of Module 2 will take place actually on the bike.

All the while, the examiner will give you directions using a one-way radio worn on your ear. They’ll normally follow you on a motorcycle in much the same way as your instructor would have already done during your training.

Once you’ve done this, you’re on the home straight. Almost literally in fact because your examiner will be testing you over around 10 minutes of independent riding. This is designed to assess your ability to ride safely while making your own decisions so you can expect him to give you a destination (or a series of turn instructions) and then they will follow behind to see how well you do.

Don’t panic though - because you can ask the examiner to repeat the directions if you forget them, and - most importantly - you will not fail the test if you go off the route.

But no, before you even ask… you can not use a sat nav!

Once this is done, you’ll return to the riding test centre and they’ll tell you if you’ve passed (or failed, but let’s be honest, that’s not going to happen, is it? Because you’ve fully prepared yourself by following the steps above).

And that’s it… CONGRATULATIONS! You’re a motorcycle rider!

Take Quiz To Get Started

Now you’re a fully qualified rider, you’ll want to go out on your bike and tear up the local town - or totter off on that big adventure you’ve always planned… But before you start, make sure that you have the right kind, and the best quality, riding gear.