You’ve just passed your CBT training and you’ve spent every waking moment on your motorcycle since - from sun up to sun down you’ve been riding, enjoying the metaphorical wind in your hair (because you’ve been wearing a helmet, right?) and revelling in the freedom that only two-wheels can offer. But at times, this freedom can also bring about complacency and this means that you may be more prone to making mistakes… And this relaxed forgetfulness is something that doesn’t just happen to new riders, but to older, more experienced motorcyclists too. So here are our five top mistakes that new motorcyclists make once they’ve been out on the road for a while…

1 - Thinking that you’re invincible and ‘good enough’ to never learn new things is a terrible thing.

It sounds obvious, but once somebody has placed that ‘pass certificate’ into your hands, this doesn’t give you licence to instantly stop learning. In fact, if anything it’s the opposite; because now you’re out on the open road on your own, you’re more vulnerable, as new motorcyclists, to the hazards that all road users face. Why not look into a rider skills course, or an advanced rider training programme whilst you’re in learning mode? The skills and techniques you’ll learn on these courses - combined with those that you’ll be learning and teaching yourself daily on the street - will make you a better and safer rider. 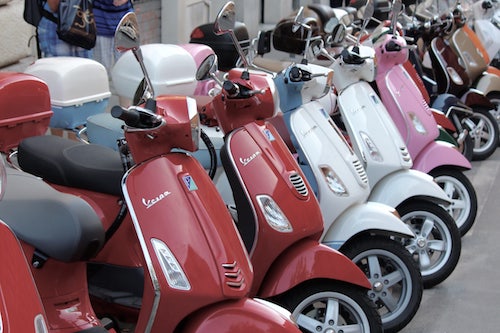 2 - Don’t treat all road conditions and traffic circumstances as the same.

You’re excited and the idea of hitting the open B-roads to practice getting some lean-angle can be enticing. And yes, doing this on a quiet, open road can help you improve your riding skills by learning both the limits of the bike and your own personal boundaries… But just because you’ve picked up this skill on a quiet Sunday doesn’t instantly make it transferable to your Monday morning, rush-hour commute. Treat every day and every road as a new experience and respect each and every ride. Carefully and confidently edge yourself forward and push your limits, but do so in a measured and calm way. That’s the mark of a truly clever rider.

You wouldn’t instantly jump off from the highest diving board at your local swimming baths, so why do people instantly think they can handle the power and pace of a 1000cc Superbike? Also, why do people think that a Hayabusa is the best bike for riding across town, when in that situation it’s often too big, too clunky and totally terrible for filtering through city traffic? The answer is that we’ve all been wrongly taught to believe that big numbers are best.

Do you know what the best bike for riding through your local B-roads is? It’s the one that will keep you comfortable, safe and gets you there in one piece.

4 - Assuming that nobody needs to check oil and air anymore is bad.

Maintenance is king. As much as we’ve all been persuaded by modern manufacturers that cars and motorcycles are ‘hassle and maintenance free’ the fact of the matter is that checking that you have enough air in your tyres or that you have working brake lights is vital to your safety on the road. Plus you know what’s really bad? Running out of fuel half-way through your journey and having to push your bike to the local petrol station. Spend two minutes a week just checking that your bike is safe and you could save yourself physical pain or at the very least a few weeks of teasing from your mates.

5 - You are not as cool as you think you are. In fact, most people won’t even notice you.

Just because you’ve got the loudest pipes available, love to rev up your engine at the lights and are dressed in the finest Rossi-Yellow gear that your bank balance could allow, doesn’t mean that you’re being considered by onlookers as the coolest cat on the street. If we’re being honest, most people passing by on the pavement will either think you’re an idiot or ignore you entirely, so just imagine what the drivers of the other vehicles on the road are thinking?

If you ride like your invisible to other road users you’ll be able to prepare yourself for the inevitable cut-offs, overtakes and general ignorance of the car drivers around you.

It might not feel like it at 6am on a cold city street during the pouring rain, but motorcycling is probably one of the greatest things you’ll ever do in your life - it’ll bring you pleasure, smiles every mile and the freedom to travel the globe if you wanted to. So even though you hate Mondays and the idea of leaving your bike at the train station before work fills you with dread, don’t forget to smile and remember that you’ll be seeing your trusted steed later on in the evening. And on that ride back - why not take the long way home? You deserve it!