If you’re looking for a solid town or city runabout, you don’t need to break the bank. In fact, if you don’t mind looking at some less-than-familiar manufacturers there are some pretty special bargains to be had with 50cc scooters.

Here a few that have caught our eye...

This little ‘Sports Scooter’ from British internet retailer Direct Bikes doesn’t even come with a brand name or fancy title… It’s literally listed as a ‘50cc Sports Scooter’ on their website is listed for sale at just £799 (July 2018).

Available in Black, Pink, Yellow, Red, White, Blue, Silver and Grey the colour chart for the bike is more detailed than the engine specification - it’s simply called a ‘DB139QMB, Single-Cylinder Four Stroke’ - but at less than a grand for an 80kg, 50cc runaround, it’s hard to not see it as the ultimate in value-added transport. Assuming you don’t worry about the varied reviews you can find online and reckon you’re capable of a little bit of DIY maintenance every now and then. 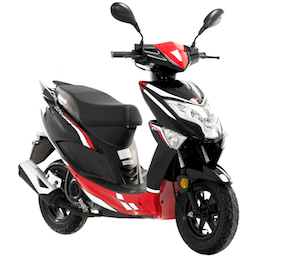 If you’re looking for a ‘cheap as chips’ scooter, but you want something with a little more ‘sense of reliability’ than the competing Chinese clones on the market, then you could do a lot worse than to cast your eye over the Lexmoto catalogue.

Lexmoto have made great strides over the years from the Devon HQ and since 2016 they’ve sold close to 30,000 bikes here in the UK, which makes them one of the biggest selling sub-125cc brands in the country.

You’re not likely to break any speed records on this sporty looking 50cc machine, but the handling has been described as ‘agile’ and with underseat storage, additional luggage racks available and a Euro4 compliant, four-stroke motor, for around £1,100 (July 2018), this might just be the bike that makes your two-wheeled dreams come true.

At least until you can take your 125cc test! 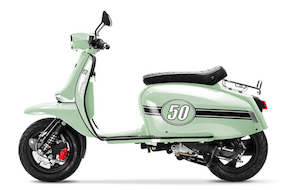 The Scomadi name has been growing over the past few years… Having arrived as the brainchild of Paul Melici of PM Tuning fame (quite a tidy Scooter tuning outfit from Lancashire), the Scomadi name may sit above a British firm, but the style and ethos emanating out of the company is all Italian cool.The Scomadi TL50 comes in all sorts of epic, retro colour ways and your guaranteed to turn some heads whilst astride that lovely bench padded seat. And that’s people see the roaring Black Panther above the Lambo/Ferrari-esque badge! 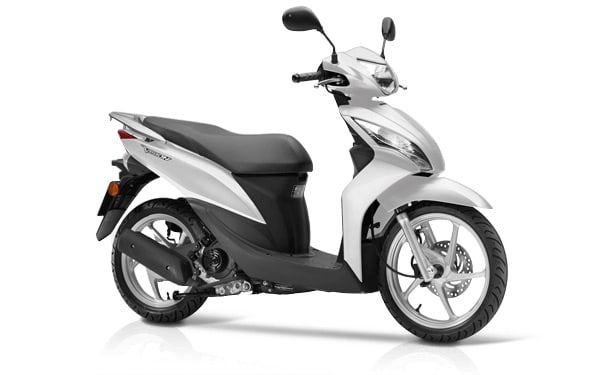 Honda don’t list the little Vision 50 scooter on their website anymore, but we’re including it here because it’s probably the best all-round 50cc bike available.

If there are two things that Honda are known for, then it’s quality and economy. And the Honda Vision 50 has both in spades - claims of over 145 mpg from a single tank of fuel are not beyond the realms of possibility.

You may need to look out for it in dealers and second-hand showrooms for now, but if you’re looking for a reliable, frugal and practical 50cc scooter, then it’s well worth taking the time to check one out.

We have teamed up with the top bike dealers in London to find you the perfect motorcycle.