Motorcycle Security - Keeping Your Bike Safe As A New Rider

So you finally learnt to ride and got yourself a new bike. Congratulations and welcome to the family!

As a new rider, you will be excited to hit the road, but you may not be aware of just how vulnerable your bike can be to theft. In the UK and especially in cities like London, you have one in eight chances to have your bike stolen each year, and this rises further if you have a desirable motorcycle or scooter. The general rule given these statistics is to budget between 5-10% of your bike value on security.

Unlocked, easily accessible bikes are partially responsible for the 9,000 scooters, motorcycles and mopeds thefts in London in the last year. It can take a matter of seconds for a thief to steal a moped, scooter or motorcycle, especially if they are left either unsecured or with inadequate security. The stats may seem frightening, but there are a few steps you can take to reduce these chances significantly. 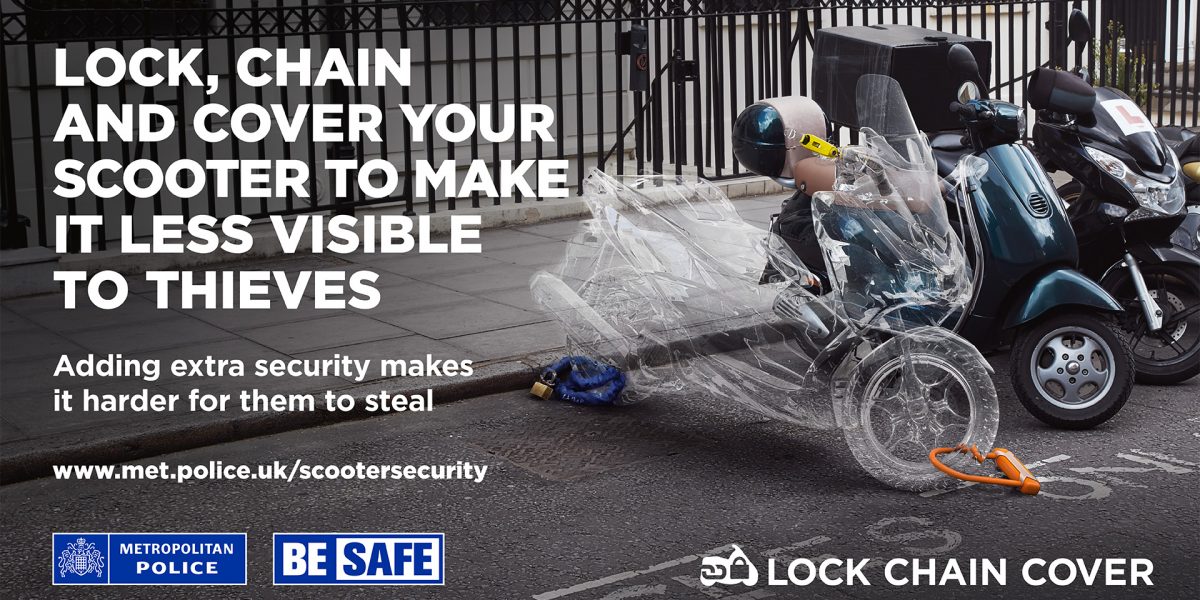 London's Met Police has some straightforward rules for keeping your bike safe: lock, chain, cover. We would also advise you to use at least two different security systems to protect your motorcycle at all times, but it's best to stick with the holy trinity.

According to Bennetts, the bike insurance specialists, seven out of ten owners still leave their machines unlocked in city bike parks. On the most basic level, you need to remove the keys (we've all forgotten to do this at least once!) and ensure you use the steering lock at all times. Otherwise, you might as well give away your bike to the thief. You can also consider a variety of locks to help secure your bike further. 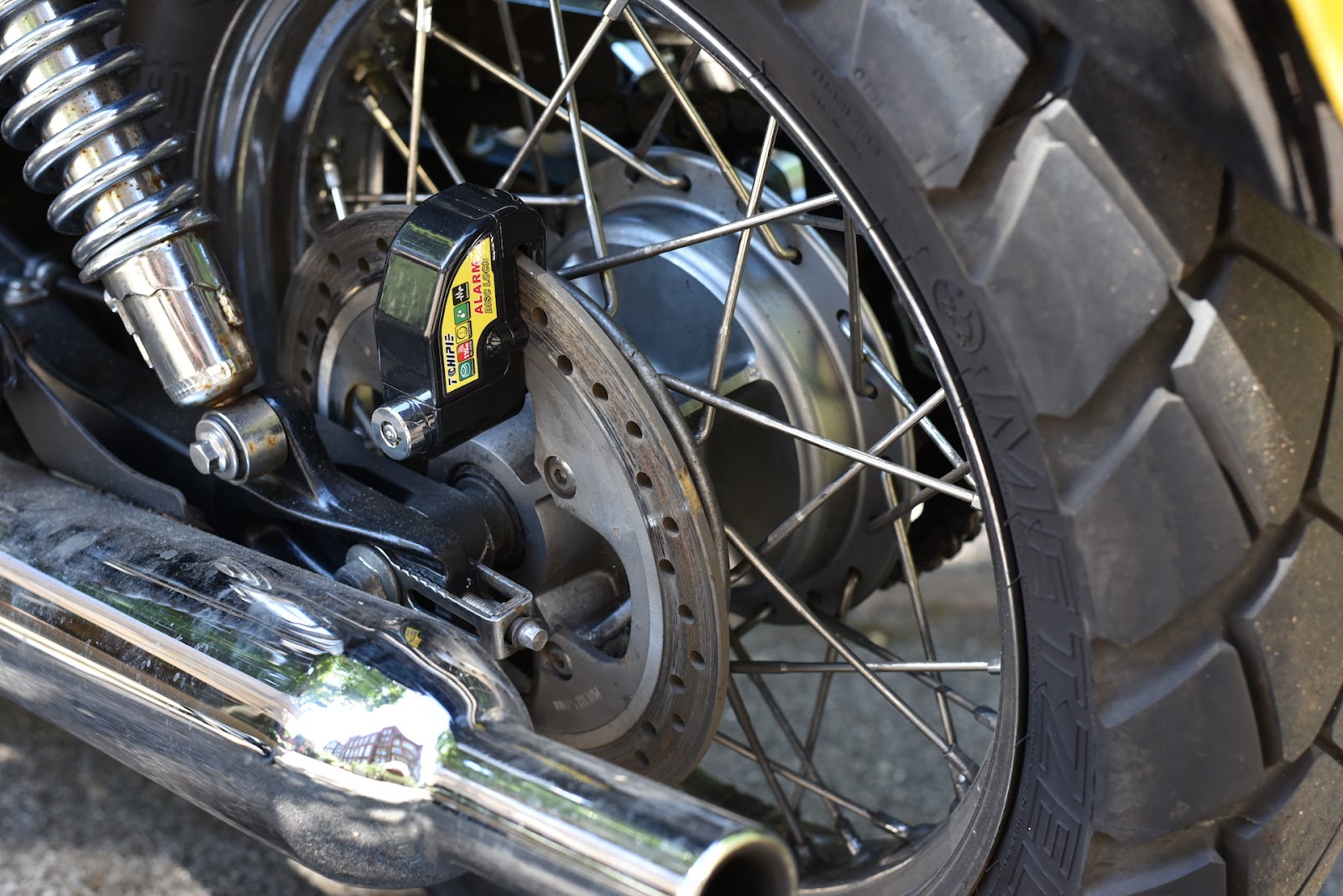 Disc locks are small, light and cheap, and physically prevent your motorcycle from being wheeled away by securing your rear brake disc with a bolt or small pin. They mostly act as a deterrent as they do not prevent a professional thief from simply lifting it into a truck and driving it away. However, the chances of having your bike stolen with a van are very slim within an urban area. So a disc lock is still one of the best security devices you can use, especially if alarmed.

There are two main types of disc locks, firstly the larger D-lock style, which can wrap around the whole brake disc and secondly the sometimes weaker pin style disc lock that is made specifically for scooters, due to the reduced space.

If you have the space to fit a decent disc lock, you'll want to look at some of the tougher options on the market. The standard sizes range from 10-16mm, but we would recommend something like the Oxford Monster Disc Lock, which is the best selling disc lock in the UK or the excellent and compact Xena XX14 which also includes a deafening 120DB alarm to warn you of any foul play.

Scooter specific disc locks tend to be different from their large motorcycle counterparts and rely on a small 6mm pin that attaches directly through the holes of the brake disc. Although weaker than their motorcycle counterparts, they still provide some significant protection, especially when paired with another form of security.

The key for purchasing a scooter disc lock is to look for a high-quality lock to compensate for the smaller pin and if possible get yourself an alarmed version.

A solid recommendation would be the Kovix Kal Alarmed Disc Lock with reinforced steel construction, recessed pin, bulky body and loud 120DB alarm. This disc lock is ideally suited for urban commuters and for that extra security at home.

The truth about bike locks is that they are only an effective deterrent if you use them. For the majority of riders and especially couriers & commuters,, it can be a time-consuming and annoying process to secure their bike when time is money, but in the event of a theft, the consequences can be costly.

If you are looking for a safe and convenient security solution that addresses these issues, we suggest you check out EasyBlock. This Italian motorcycle lock startup is dedicating its efforts on preventing motorbike thefts in urban areas. Already the top motorcycle lock choice for courier riders in London, we see more and more riders choosing the EasyBlock Lock to secure their scooters, and therefore livelihoods.

The main difference with the EasyBlock Wheel Lock is the way it works. It takes 2 seconds to lock and unlock and is attached directly to your scooter, so there is no need to carry a heavy lock with you for those shorter stops.

The toughness and security of the EasyBlock lock is also a primary factor to consider; the lock uses a 25mm bolt that secures it through the rim of the rear wheel, making it impossible to move. It gives you the security of a motorcycle disc lock on a scooter with no time penalty to secure and provides the top protection for brief stops.

As with all security devices, we don't recommend that you rely on one type alone, but a combination of the above should do the trick. The fact is, using any security on a bike makes it much less likely to get stolen, so make sure to use a system that fits your needs and level of protection required.

You can also Find EasyBlock at your local mechanic with over 30 dealers now in London.

Chains can be chunky and tricky to carry around, but if you want the ultimate protection for your bike, particularly when parked at home or for long periods on the street, you'll want to get yourself a good chain.

Chains allow you to secure your bike to an immovable object, such as a railing, a lamppost, or another bike. You need to make sure to use the most secure point on your bike, which would be the bike frame or the rear wheel. Never secure your chain through the front wheel or other easily removable or breakable parts of your bike.

TIP: A chain and lock are only as secure as the weakest point, so make sure the lock is at least as thick as the chain. 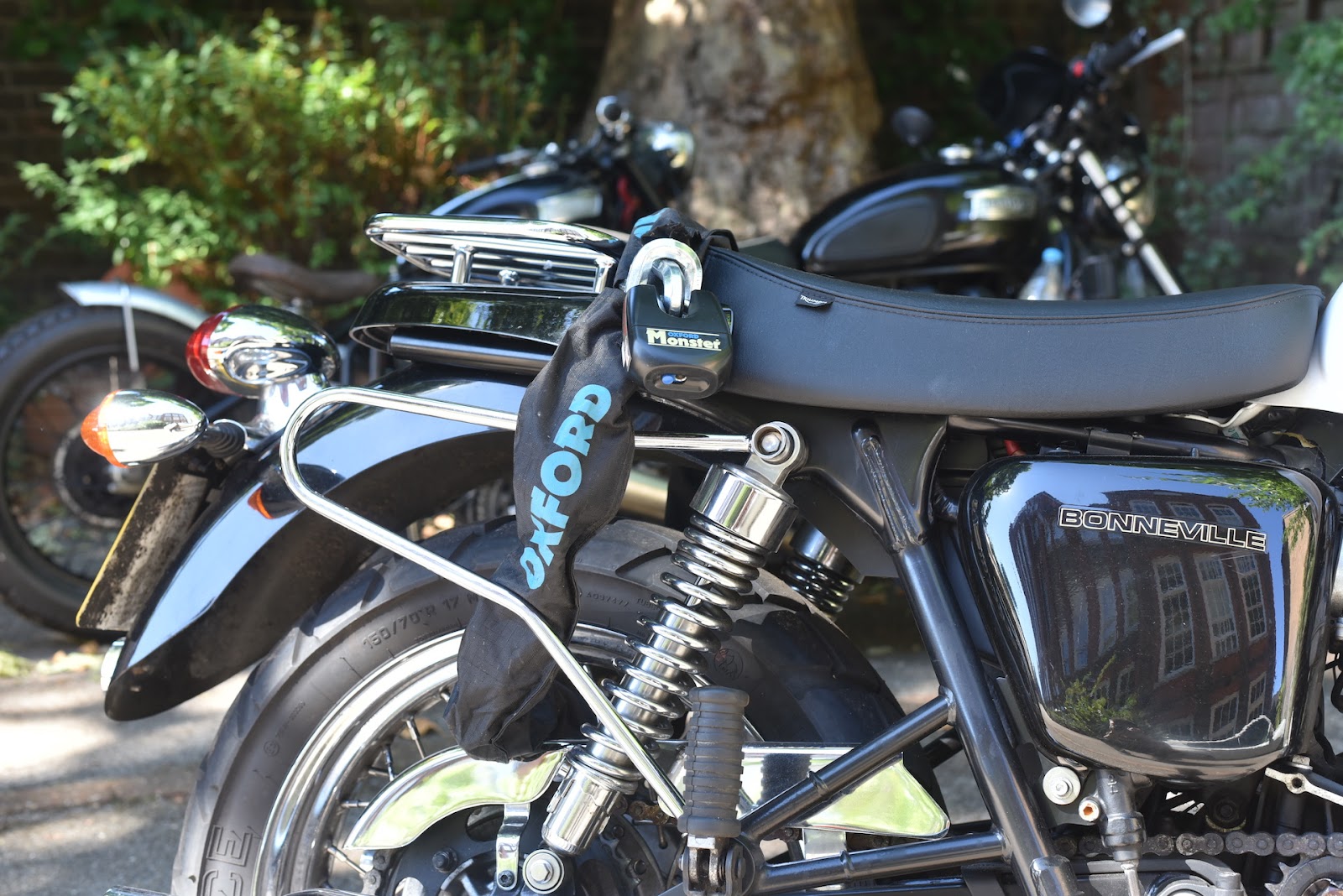 When convenience and security are essential, we would recommend you look at chains in the 14mm range. Although on the heavier side, this is when bolt-cutters stop becoming effective, and angle grinders are a thief's primary choice. A 14mm chain and lock will run you up about £80 and weigh in at around 5kg, but this is a small price to pay for the protection on offer.

When weight is not an issue, or you have a regular place to leave the lock still secured, we would highly recommend you consider a heavy-duty chain such as the Milenco Snaefell 22mm. A chain of this size will offer the best protection against all attacks and will most likely scare off the bravest of bike thieves. The noise they'd make alone trying to cut the lock and the time it takes makes it very high risk for them.

TIP: If you have two bikes, you can also chain them to each other, which will provide more protection for both bikes.

TIP: Make sure to place the ground anchor in the middle of your bike, so that it can attach to the frame instead of the wheel.

The aim of the game is to make it difficult for a thief to understand which model of bike is under the cover. It should come as no surprise, but thieves are often after specific high-valued models of bikes that they can then sell as spare parts.

Unless obvious in shape or poorly hidden, a thief won't risk looking under the cover when the majority of bikes are left uncovered, and they have plenty to choose from, especially within urban areas. Moreover, they are great for protecting your bike from the seasons, preventing rusting and general damage.

The great thing about bike covers is that they are conveniently inconvenient for thieves, especially if you add a simple cover lock. For a relatively small cost, it's a good investment for a great deterrent. 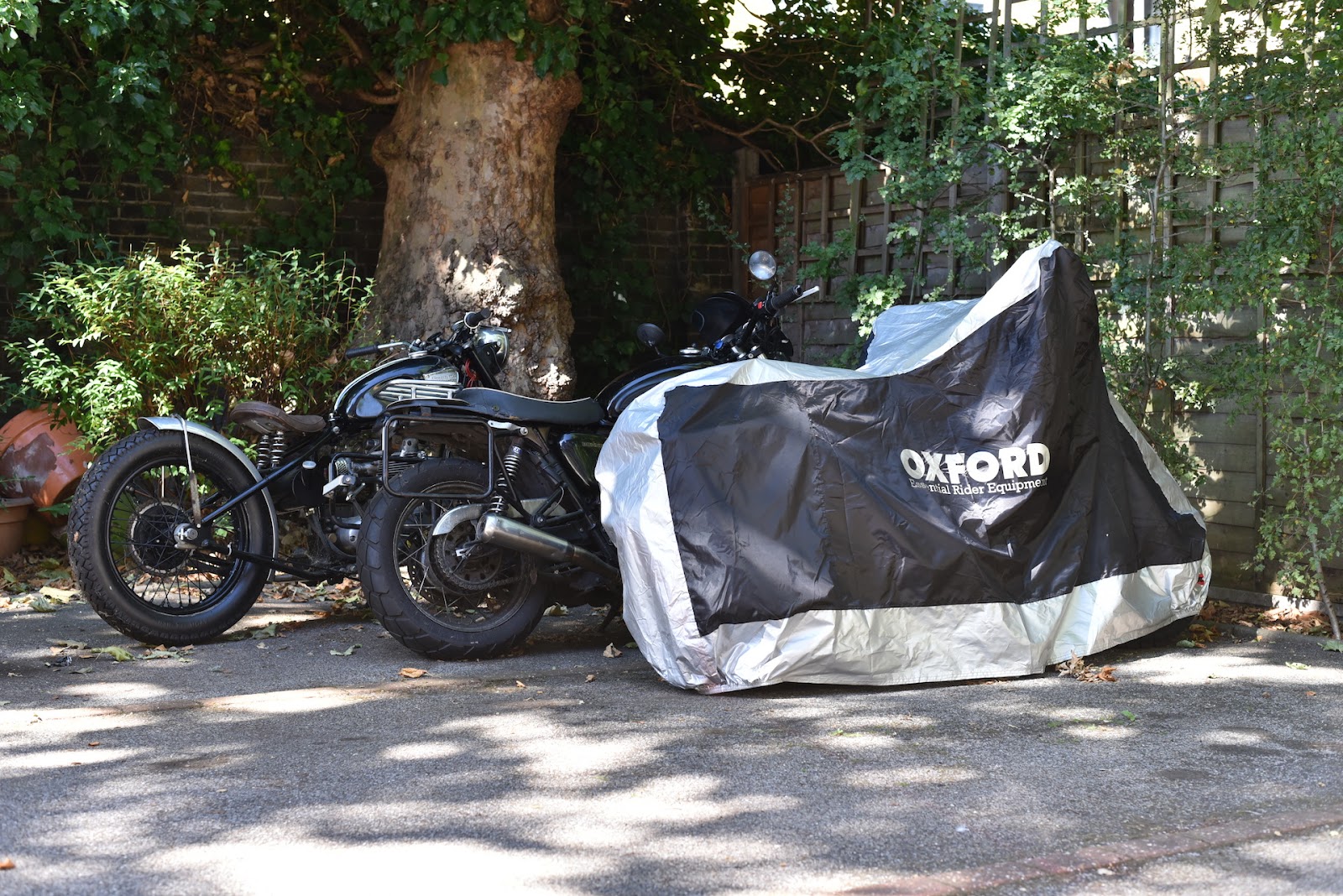 Bike covers come in all shapes and sizes, so make sure that you pick one that suits your needs. The most popular budget cover is the Oxford Aquatex Bike Cover, which will cover your basic waterproof needs. If you're after a more robust cover something like the Oxford Stormex Bike Cover will be most suitable.

Here are some tips for keeping your motorcycle extra safe and especially if it's an attractive bike that's close to your heart: 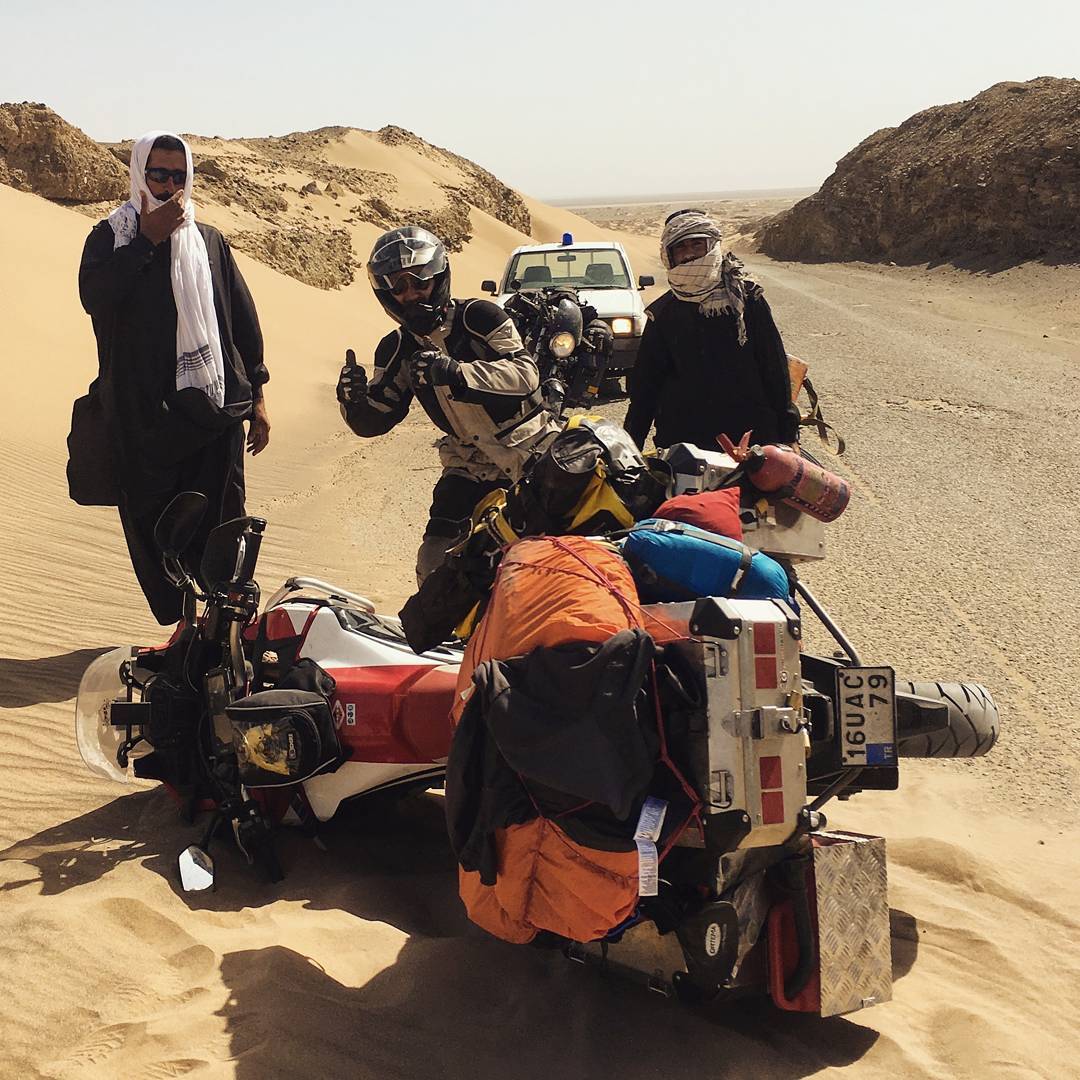 Kane Avellano is a British adventurer, a long distance motorcycle rider and Co-Founder of EasyBlock. In 2017, after spending 8 months on the road, Kane became the youngest person to circumnavigate the globe by motorcycle, officially recognised by Guinness World Records. Having had a bike stolen in the past, he has since dedicated his time to the motorcycle industry, currently focusing on motorcycle safety and security, and rider communities