We’ve said it before, and we’ll say it again… motorcycles are cool. Ever since the first mechanics began putting engines into bicycle frames the heady requirements of speed, balance and control have mesmerised both riders and onlookers alike. But the other ingredient that adds to the rebellious aura of motorcycling is that motorcycles appear to be inherently dangerous. It’s hard to argue with the fact that the notion of balancing on two wheels whilst travelling at speed is a scary one, but it shouldn’t be a daunting experience. In fact, learning to ride a motorcycle is probably easier and less complicated than you first think...

The gears on a motorcycle are different to cars!

If you’re used to driving a vehicle of the four-wheel variety then the first thing you’ll notice is that the gears work differently. Put don’t let that put you off… If you are used to shifting gears in a car then you’ll know the basics for bike riding. Equally, if you drive an automatic car - or don’t drive at all - then don’t worry either because the principles behind shifting are simple.

A motorcycle usually has a ‘sequential gearbox’, which as the name suggests means that you have to change gears in ‘sequence’ - basically, you shift gears in numerical order. On a car for example, you can shift from second to fourth without needing to touch third gear. On a bike, you go sequentially from second, to third, to fourth. This straightforward pattern to changing gears actually makes it easier to ride a bike, because you can only ever go up or down by one gear, and there are no complicated patterns to remember. The good news is, if you're looking to get road legal in the UK, all you need to do is complete the CBT course - this can be taken on an automatic scooter or a manual motorcycle for anyone 16 years old and above.

Where people tend to think that motorcycling is complicated is because of the ‘one down, four up’ pattern. If you hear people talking about this, what they’re really referring to is the fact that first gear is actually below neutral in the gear order… So you’ll start a bike in a neutral gear, click down a gear to set off in first gear, and then up past neutral again into second, third etc. So the gear pattern of a motorcycle actually looks like 1, N, 2, 3, 4. But that’s probably confused you even more so take a look at this YouTube video from American firm RevZilla and after that it should all make sense and you’ll understand exactly what we’re on about. And if you think some lessons might come in handy for learning how to change gear, check out our Gear Conversion courses.

Can a family member or friend teach me to ride? 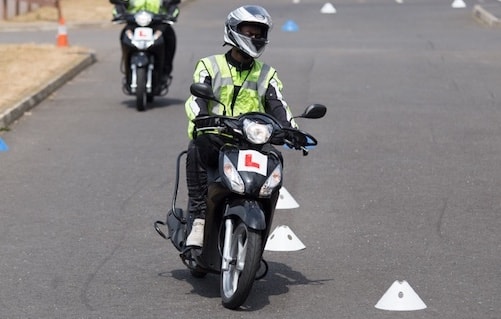 The first thing you do when learning to drive a car is sit next to a friend or family member whilst they impart their ‘years and years’ of experience onto you. This can be great and you can learn a lot of handy hints and road positioning tips. But you wouldn’t expect to pass your driving test based solely on the knowledge passed down from your granddad, and the same is true of motorcycling.

The main thing you want to be weary of is learning bad habits. It’s important to remember that whilst your parent might say that they’re ‘experienced’ drivers, this doesn’t by any means suggest that they are ‘skilled’. And being good at doing something doesn’t automatically make you good at teaching it. Every safe driver we know has had extra teaching from a qualified instructor.

So whilst having some instruction from a friend with regards to ‘how the gears work?’, ‘where the clutch lever is?’ and what pedal does what?’ is handy, you can also expect to be told numerous other pieces of advice that could actually do more harm to your riding than good.

We had a friend once who’s dad had told him that he was ‘too big’ for a 600cc motorcycle and should only ever ride a 1000cc or more machine because of how tall he was. Guess who dropped his new Yamaha R1 on the first roundabout he ever encountered? Check out our top bikes to ride on a CBT licence here

There’s also the small matter of communication whilst learning to ride. In your Vauxhall Corsa there’s no issue with having a passenger shouting advice to you from the passenger seat as you attempt to drive, but on a motorcycle - and on Learner plates - that’s a little more difficult (in fact with L-Plates it’s illegal to carry passengers). So whilst a friend can ride alongside you and scream at you from within their helmet, riding in front of a qualified instructor, usually with a two-way radio strapped to your ear is always what we would recommend.