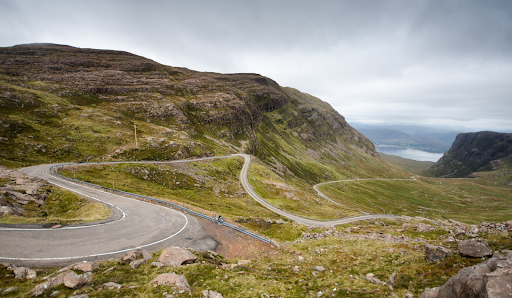 We’ve left this until last as it’s a biggie that’s going to need some planning and pre-booking, but it is arguably the most beautiful motorcycle route in the UK. It is as the name would suggest a 500-mile route around the North Coast of Scotland.

Starting and ending in Inverness the route can be tackled in either direction, but generally going anti-clockwise is a good choice. There are a lot of narrow single track roads along the west coast section, so travelling anti-clockwise eases you into the route before you tackle some of the tricky passes.

Ideally, you’ll take, at the very least, 3-4 days to complete the trip, but often 5 days to a full week is better as there is so much to see and experience. The rugged East Coast leg up to John O’Groats offers some truly beautiful views, but it's as you head along the top of the Highlands that things start to get breathtaking.

The run down along the West Coast is absolutely stunning as you skirt the huge lochs and hug the coastline. One of the most famous sections is the Bealach Na Ba pass on the Applecross peninsula. Historically it was a pass to enable farmers to drive cattle across to other areas of the highlands, and at its highest point, the road reaches 2053ft. Bealach Na Ba is only 11.5 miles long, but its narrow roads, 20% inclines and hairpins will leave you weary but elated.

To complete the entire North Coast 500 route you will need to plan and book your accommodation well in advance. The best time to travel is between May and September, outside of that you may find a lot of the accommodation closed, and poor weather will do the same to many of the passes. If you can make the time to complete the NC500, it’s a trip you’ll never forget.