After or even before taking your CBT licence, you will be considering what motorcycle you can or should purchase whilst riding on a CBT certificate. CBT Training typically takes only 1 day and you can then have the freedom of two wheels.


As a CBT certificate holder, you will be restricted to the range of 50cc to 125cc sized motorbikes, scooters or mopeds. You will not be able to ride on motorways, carry passengers and will always need to display L-plates. This may not be cool, but it’s the law.

If you are set on getting on two wheels the most exciting consideration is which bike you can ride on a CBT. As the largest training platform in the UK, our team at RideTo has put together our favourite 15 motorcycles that we want to be riding.

The Honda MSX125 or you may have heard it referred to as the Grom. The Grom is a US term used for describing a ‘young precocious surfer’ sums up the MSX pretty well. As one of the coolest 125’s available that doesn’t look like a learner bike, as a young new rider, it doesn’t get much better than the MSX.


The MSX is built for zipping in and out of traffic making it a superb way to filter through busy situations with enough versatility to go off-road and survive all year round. This MSX is incredibly light meaning, any ventures off the beaten track are desirable, and an easy substitute for the daily commute. 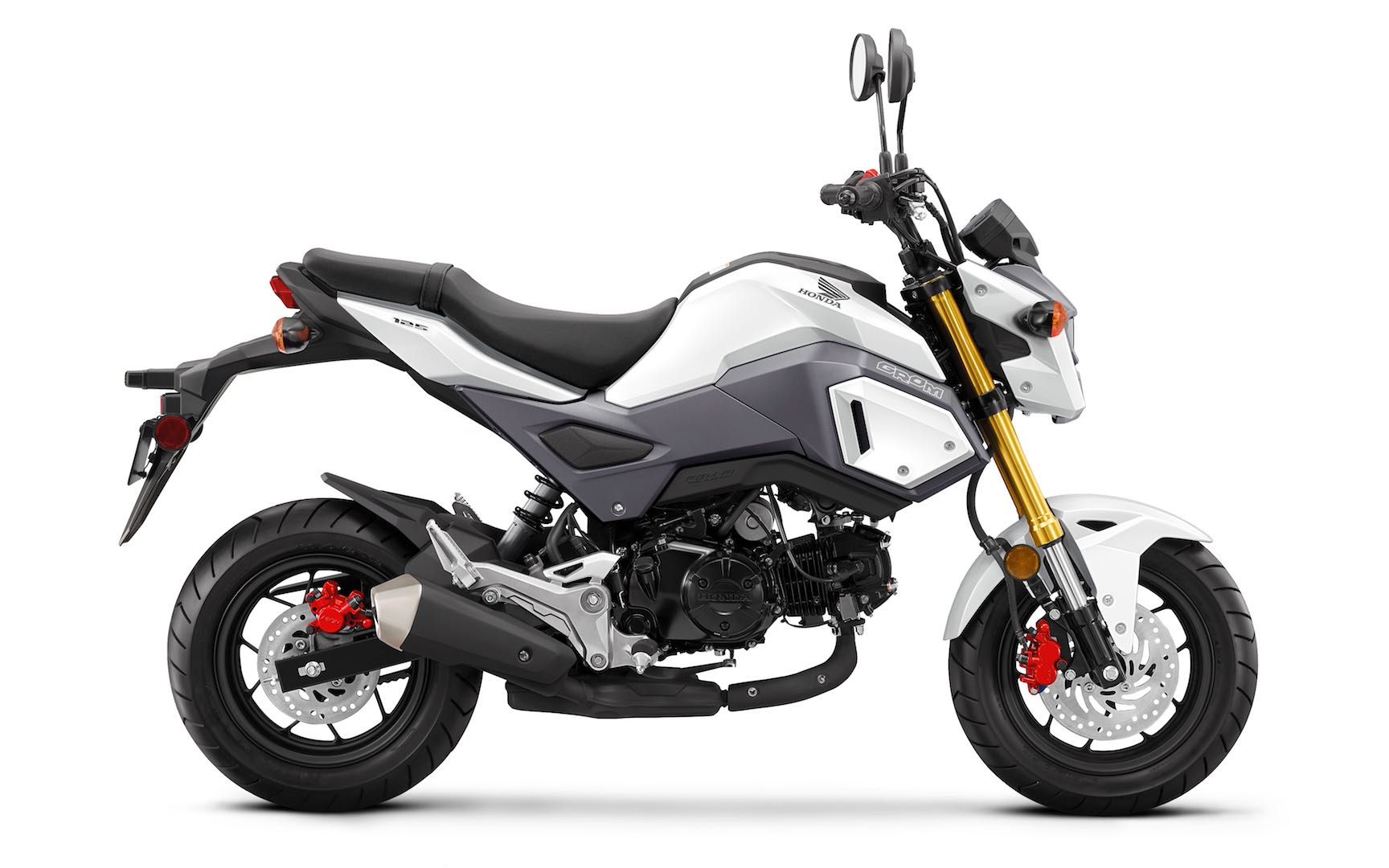 A riders classic with 40 years of history, a bike that has barely changed and an engine that goes forever. The CB125F known for being super reliable and extremely popular in Asia and S.America has literally been driven across the world. However, Mr. Reliable offers not much torque or acceleration with 11bhp to its name and many would say reliable is a bit boring.

This being said, with a great turning circle, smoother gearbox than sporty bikes, being significantly cheaper and having around 100mpg makes the CB125F an entry into the top 15 for those looking to ride the distance. The most significant reason that the CBF125 makes our list is that with its reliability and longevity, the CBF125 is the perfect second-hand bike. You will be able to pick up a second-hand CBF for less than £1000, and on top of this long term maintenance costs are low, making the CB125F great value for money. 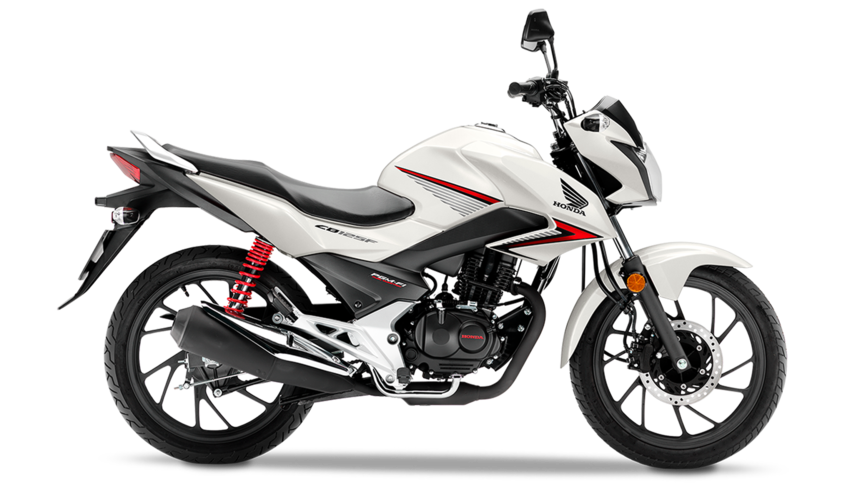 The Honda CB125R is a cafe racer-inspired bike for the future, with LED headlights and a HUD with a shift light (notification to change gear) that is truly new rider-friendly with a good amount of power for a novice. Ensuring that you don’t damage the engine due to great features like the shift light make the CB125R a superb choice for the new rider looking for a bit more power.

Handling excellently around the city with an upright position, 13 bhp, tight turning circle and soft power delivery, the Honda excels across all fronts for city comfortable riding. Additionally, with a Honda dealership around every corner, it’s a sporty bike with lower running costs than many of its competitors. 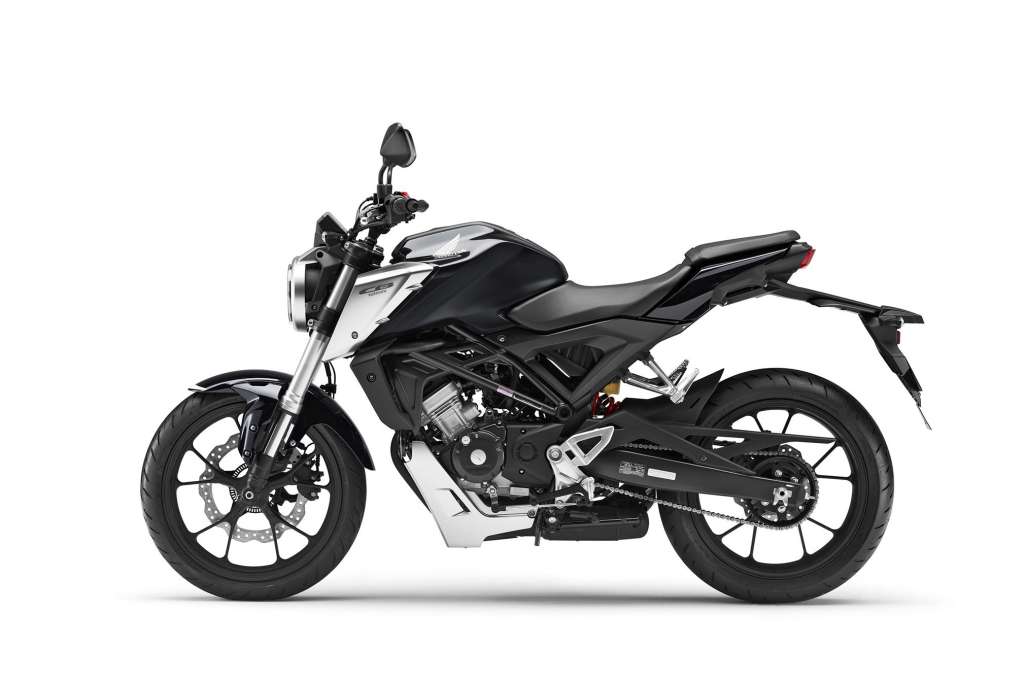 How do you describe the KTM Duke 125? Orange and Austrian. Both true and jokes aside, the KTM is a peoples favourite with a great sound for a 125, great in towns by being nippy in traffic and offering an upright position. Being able to flat-foot at the lights, is a great advantage for the shorter rider. The Duke exudes quality and offers an excellently comfortable ride for commuting but fast enough to have fun on the open road. We have featured the Duke 3 years running, and it’s easy to see why. 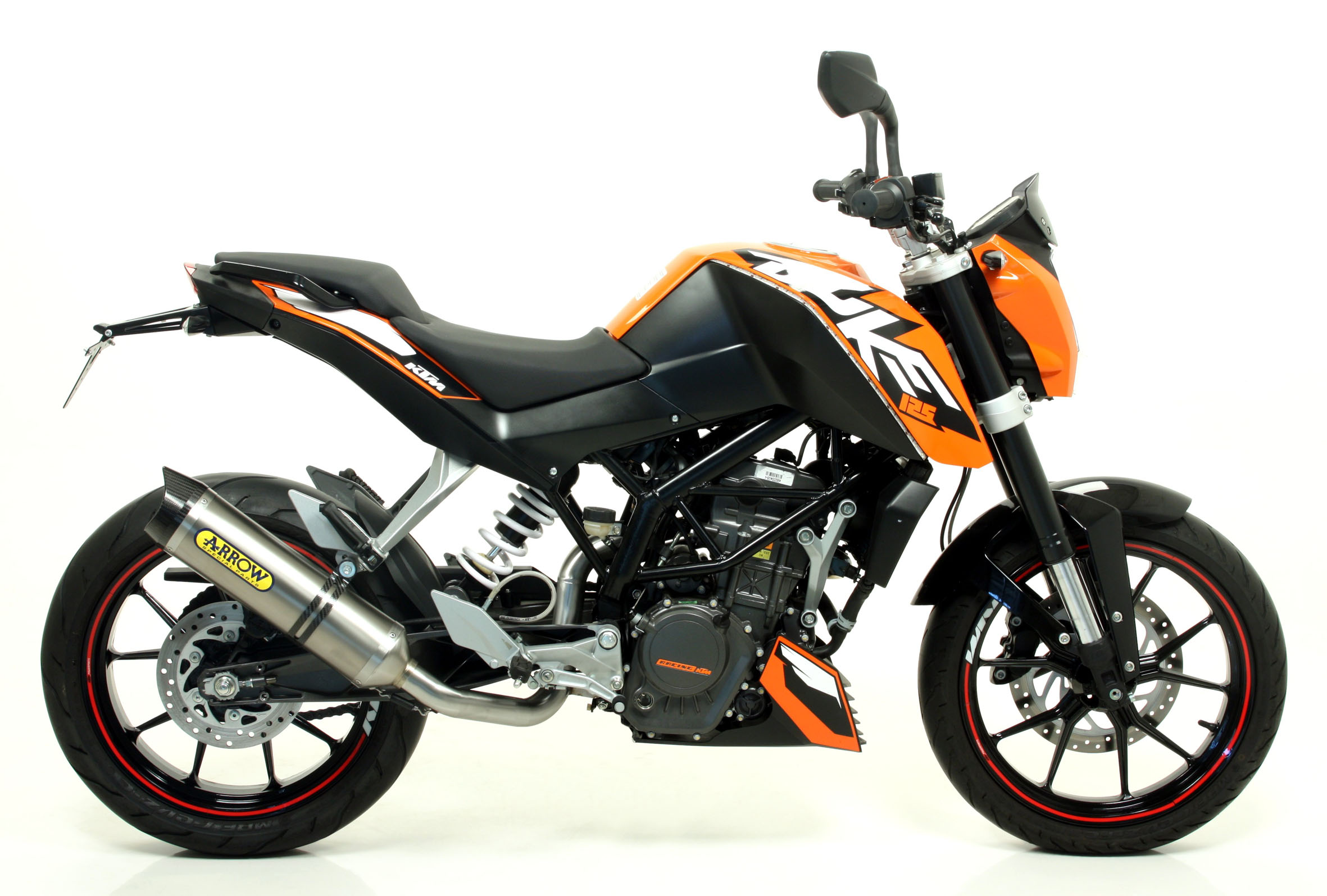 Are you looking to post regular updates to your Instagram, looking like Steve McQueen on your new bike looking cooler than ice? Then the Mutt is for you. With a huge community following for being one of the coolest bikes on offer, we have outlined the Mongrel for its great sound and rideability.

With the rough and tough image portrayed by Mutt’s best selling bike you’d expect the same from its ride. Not at all, the riding position feels natural with wide bars, giving light steering with a weighty clutch and a good lock for filtering traffic in the inner city with ease. 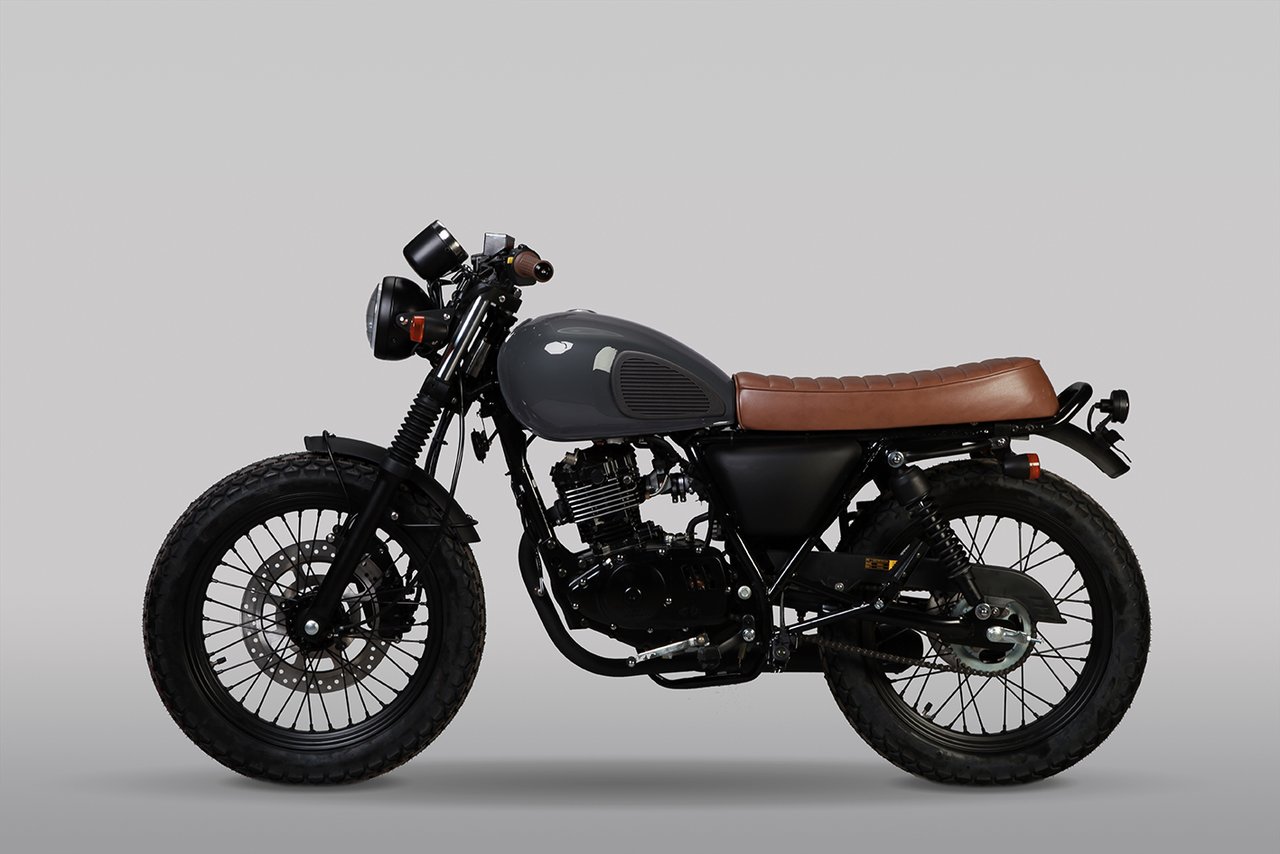 For those looking for something a little more sporty, this is RideTo’s choice. A true work of art, a stunning bike that has a fuel-injected single-cylinder engine that's restricted to 11kw (14.75bhp). With incredible looks and a lively engine, it’s impossible not to fall in love with the Aprilia. 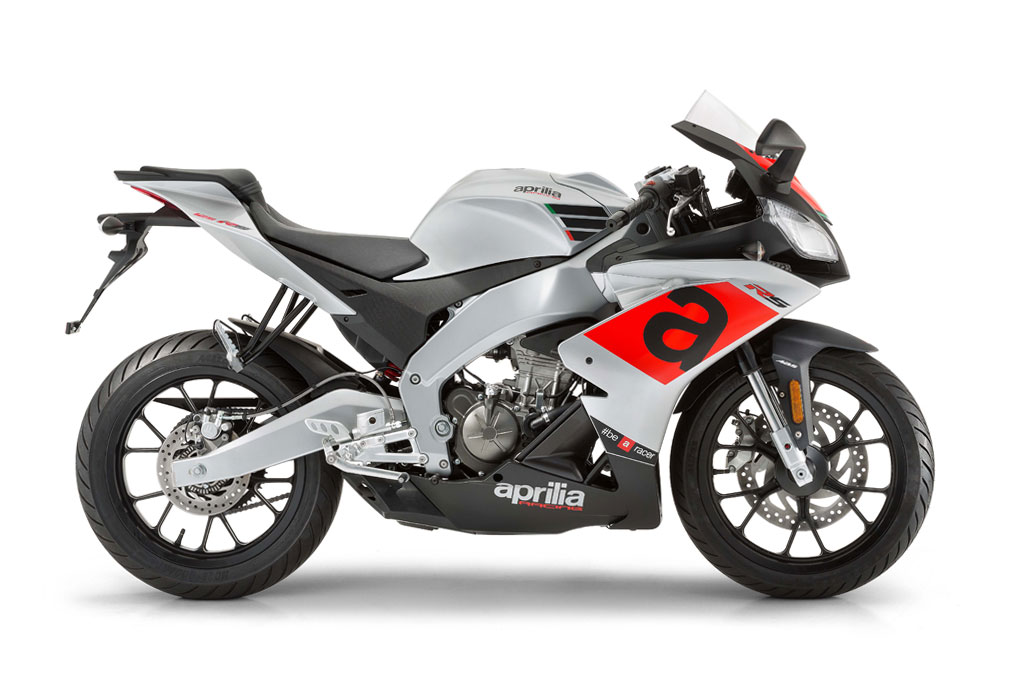 The Yamaha YZF-R125 has been a best-seller since it came to market in 2014 with this new updated version. Along with the above Aprilla RS 125, it is one of the best and most sporty bikes available to purchase on a CBT certificate. A really modern bike, with all the technology and gizmos you could desire. With the addition of ABS braking in 2014, sharper styling, engine upgrades and some cool new instruments make for a fantastic and fast ride. The stand out feature is the dashboard on the YZF-R125, it really is a PS4 to many of the other bikes Nintendo 64. 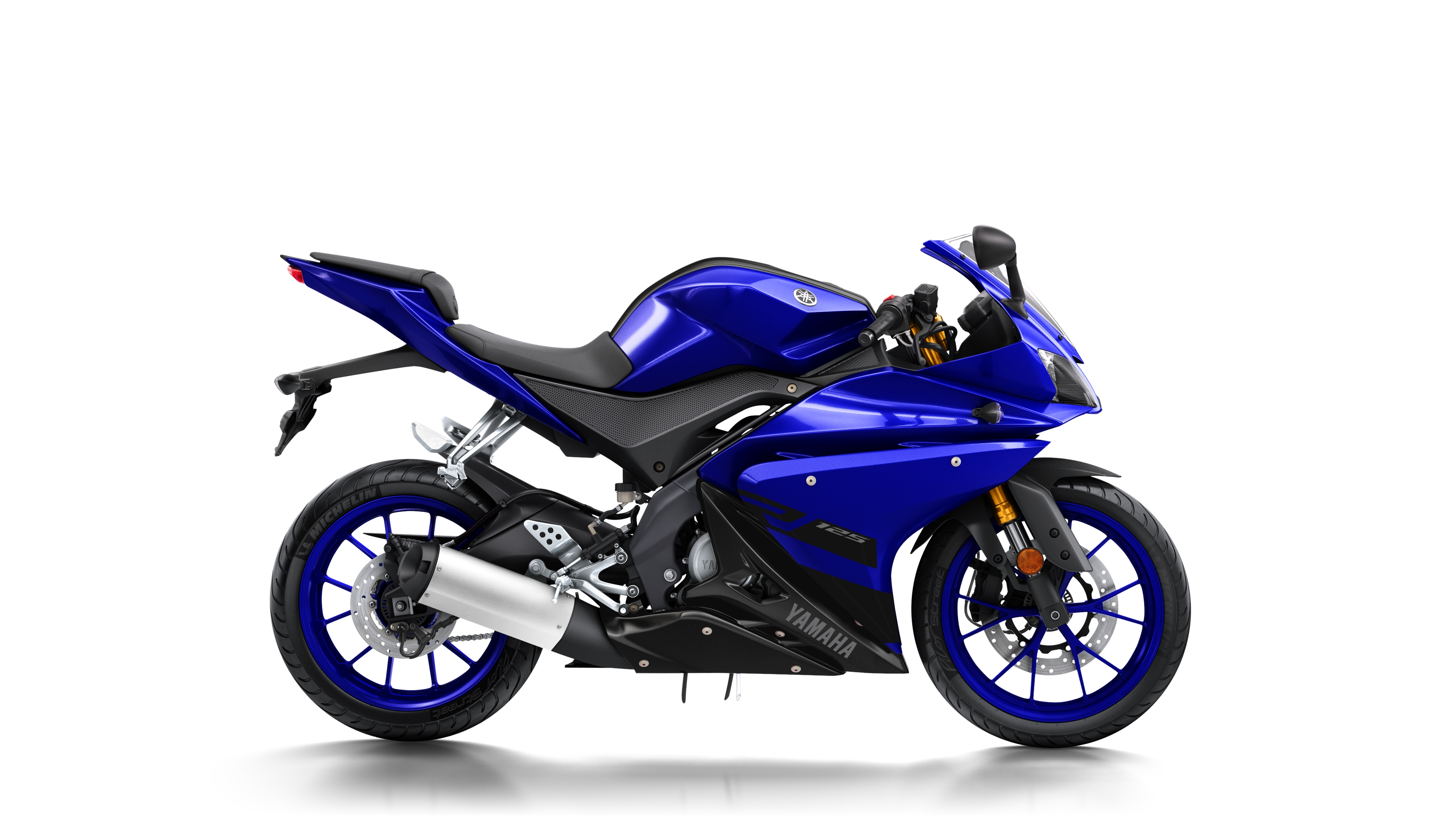 With roots back to 1971, many over the years describe the VanVan as a timeless classic and one of the coolest bikes of all time. Considered to be able to ‘last forever’ and nearly ‘indestructible’, the VanVan has a lot going for it. The VanVan is the people's choice for couriers, with great luggage capacity with a multitude of options for top boxes and side panniers. However much we love the 1970s retro feel and awesome looks we get from onlookers as we drive past in its natural habitat of the inner city, the VanVan is not the option for riders looking to roar away from the lights and with 60mpg and a range of 100miles it's not made for long riding at any sort of speed. Either way, we still love this piece of nostalgia. 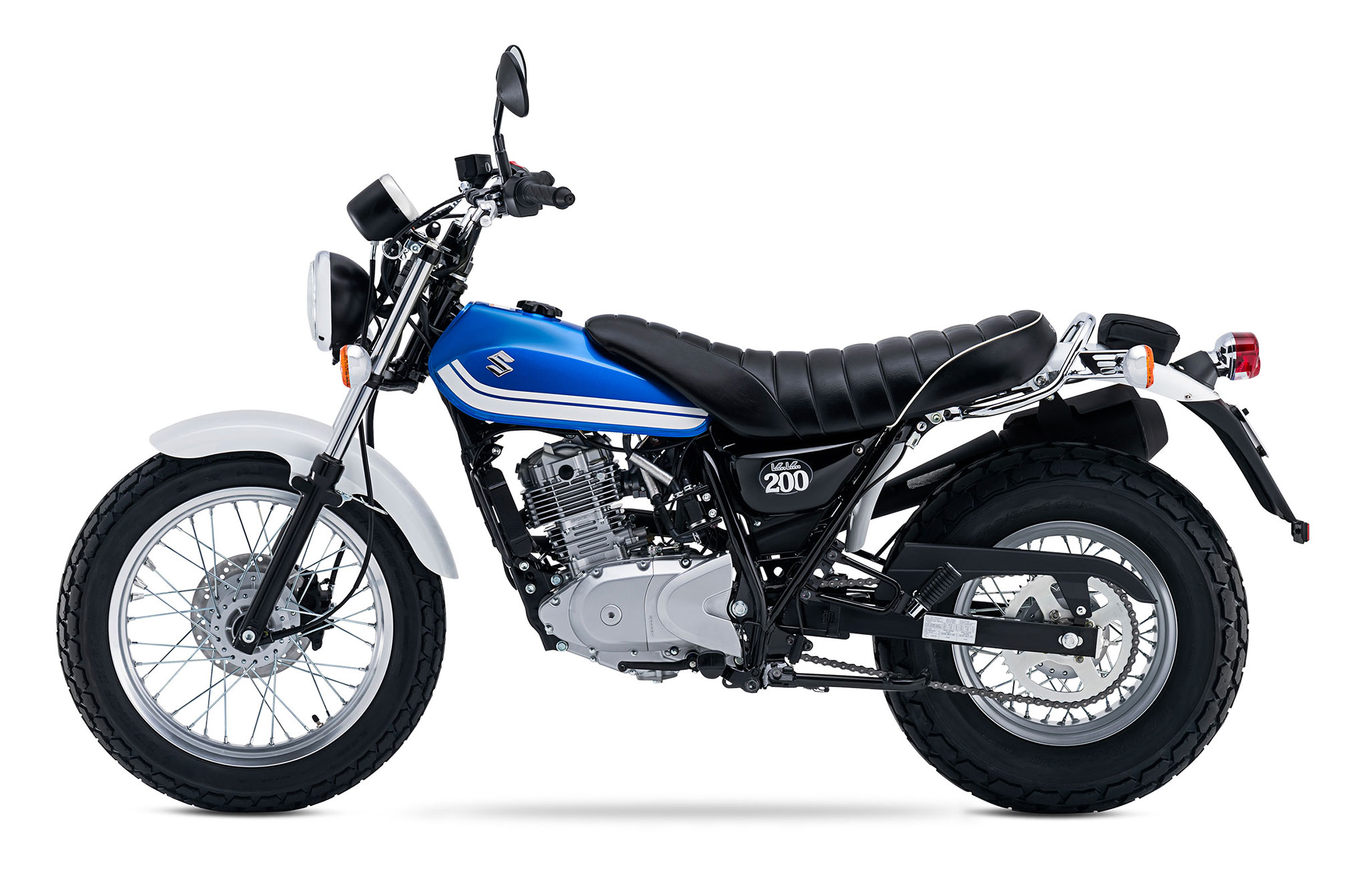 The Super Soco TC is the first electric bike that makes the cut for our top 15 bikes on a CBT. We may be starting to see why electric bikes can be the future, with a well made, nice ride that doesn’t go out of its way to be seen as an electric bike and be ‘different'. With a very competitive range of 100 miles and no noise or emissions, the Super Soco has its rightful place on our top motorcycles and is the RideTo selection for the best electric motorcycle to ride on a CBT. 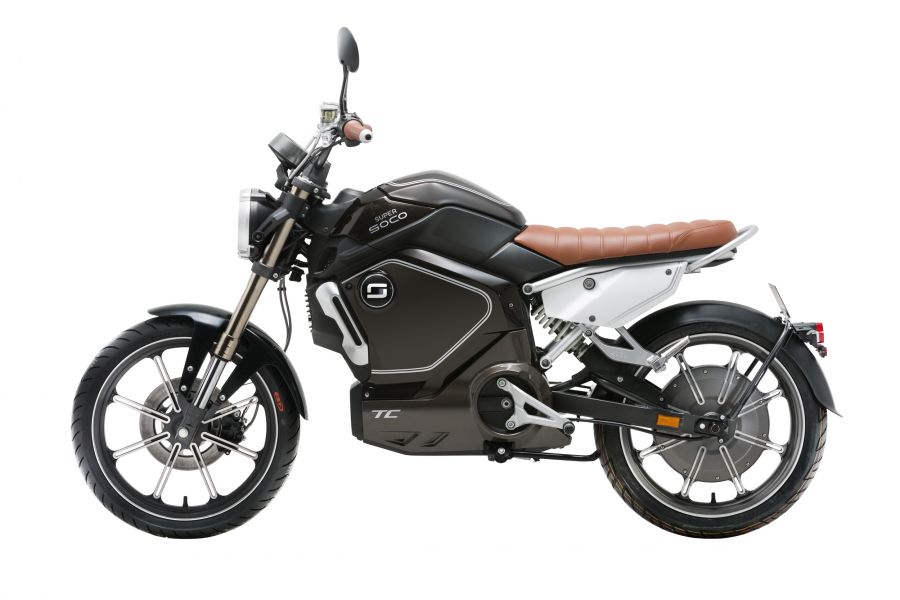 The second electric bike that we are going to feature is the Niu NGT, and this scooter has yet to make its mark on the UK market but it certainly has the potential to make waves. A very affordable smart scooter with a similar range to the Super Soco of approximately 100 miles (eco mode) and a battery that can be charged in just 3.5 hours, which is a great feature for those city commuters worried about an extensive charge of an electric battery. Not to worry about performance either - with an approximate top speed of 44mph means around town you can hit the speeds needed to get to your meetings in time. However, the coolest feature is that the NGT is a smart scooter, connecting to your phone so that you can track 17 different indicators of bike health. 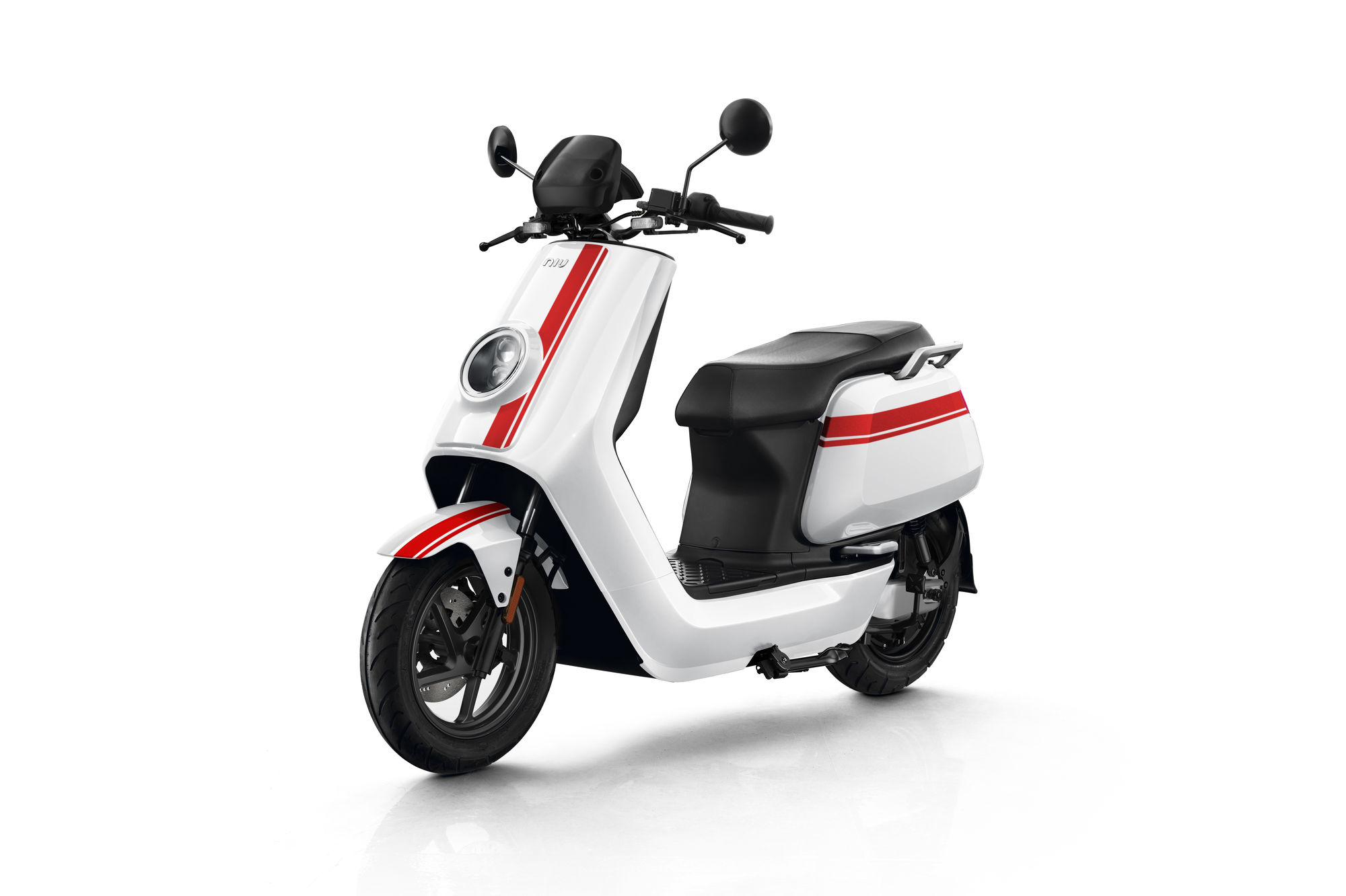 The Moto Code described by its own manufacturer as the everyday companion is actually very accurate. With a 10.9 bhp, 112 mpg, combined braking and many of the essential gadgets for modern-day riding, the KSR Moto Code offers one of the best rides for an extremely affordable price. As a first bike, the Moto Code offers a neutral and comfortable riding position, that's easy to ride and manage with the addition of being low enough for the majority of riders. The Moto Code 125 is one of the best novice-friendly bikes and is under £2000. There is a lot to love about what KSR has done with the Moto Code 125. 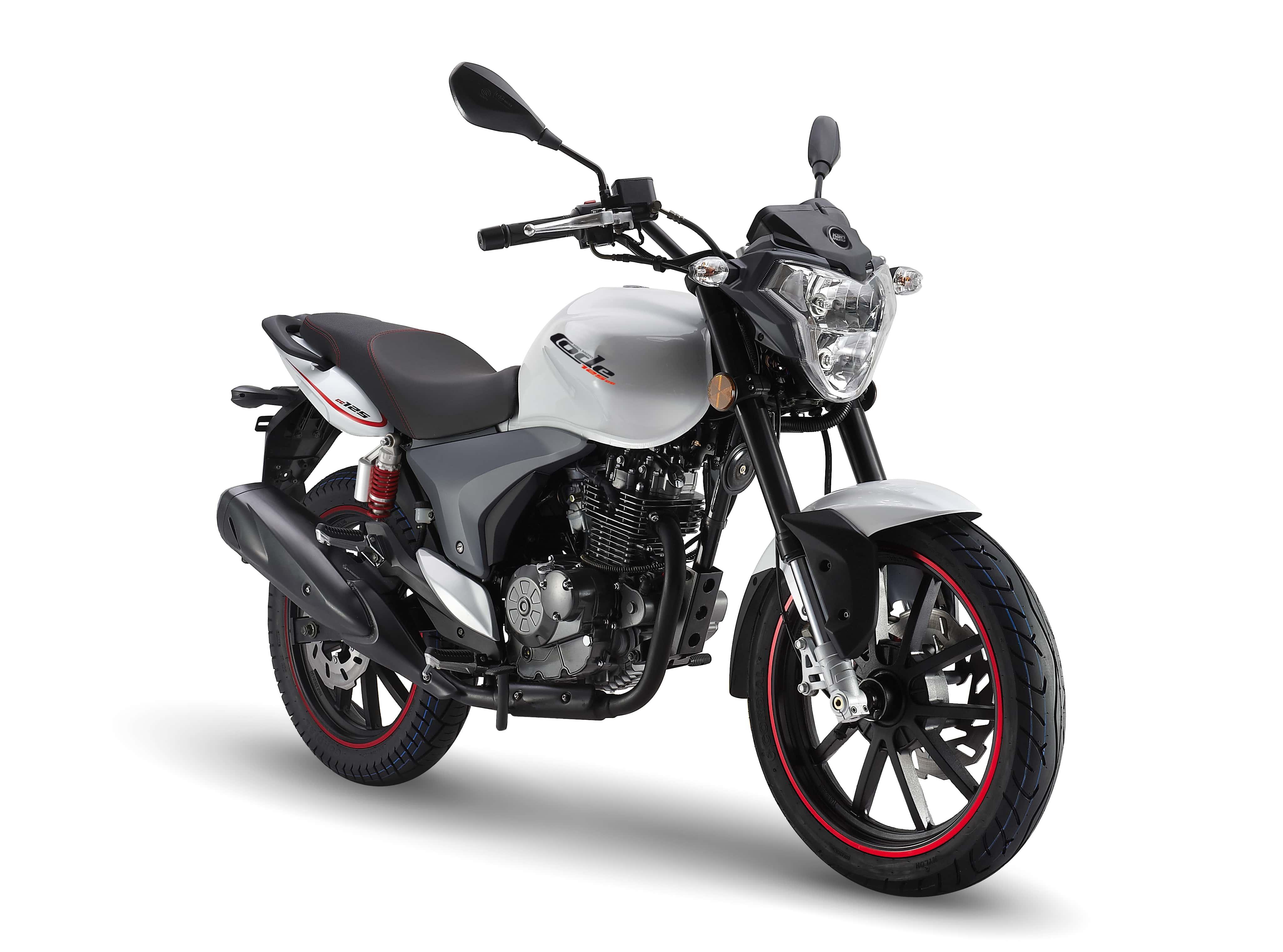 The NMax’s stylish looks aren't the only aspect that you should get excited by, this Yamaha sets itself apart from other scooters with ABS as standard and a super comfy ride, making the NMax great for longer town rides or commutes with enough power to have a bit of oomph when needed - a fan favourite for delivery riders. From a financial standpoint this Yamaha is extremely economical (129 mpg) and with access to cheap parts, being very reliable and overall holding value very well compared to other competitor scooters. 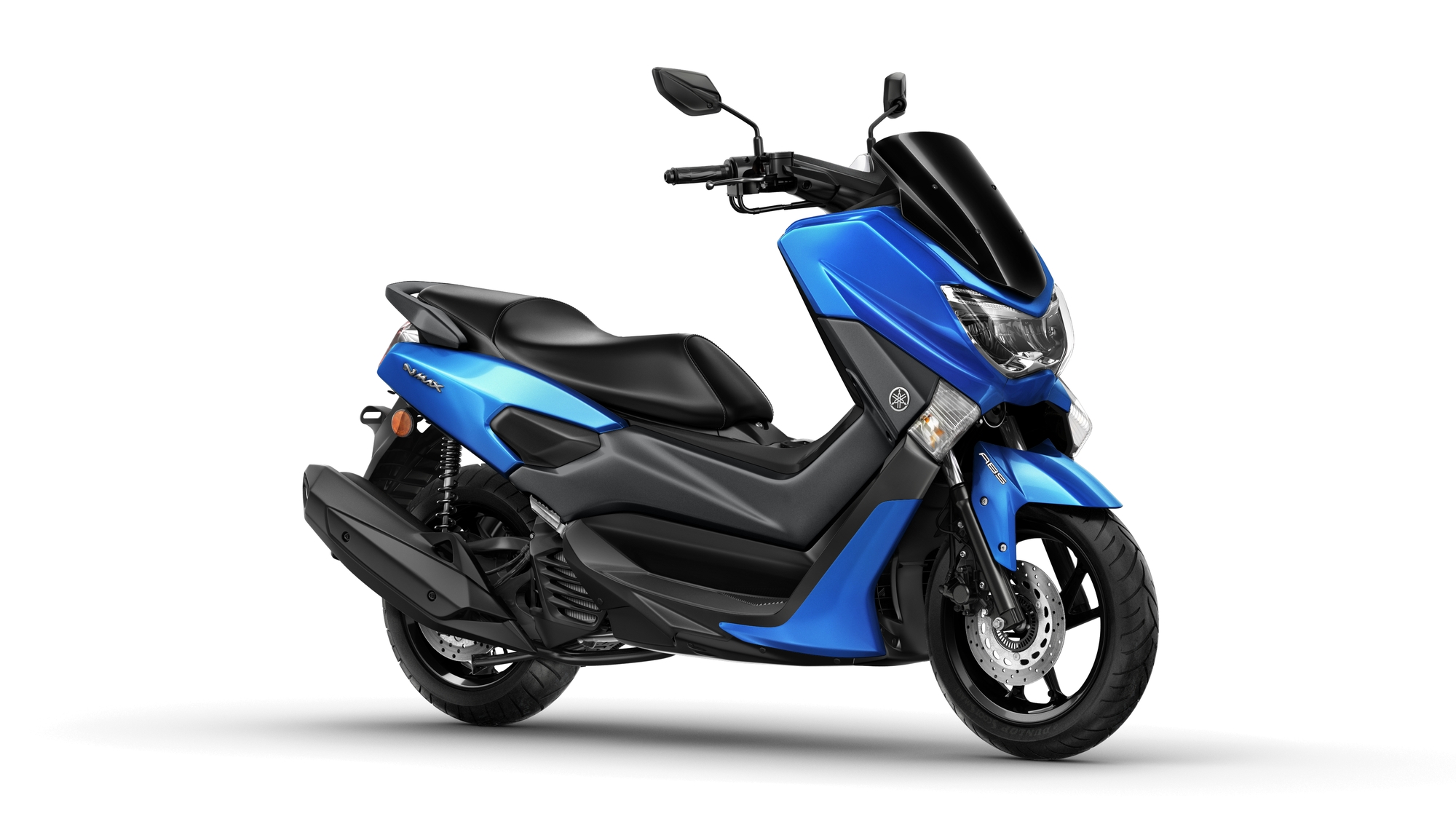 Lexmoto’s best selling import is an affordable, reliable and durable market leader. Perfect in traffic that feels and looks like a bigger bike than many of the Adrenaline's competitors. The Adrenaline has a great option that you can tweak the suspension easily, making this Lexmoto competent on and off-road. Easily pushed up towards 70mph it's not lacking in power with 9.7bhp. However, for the learner rider, the Adrenaline does have a high stand-over height, so it's not the option for the shorter rider. The Lexmoto Adrenaline overall is a certain entry into our top 15 with it being the RideTo value for money choice. 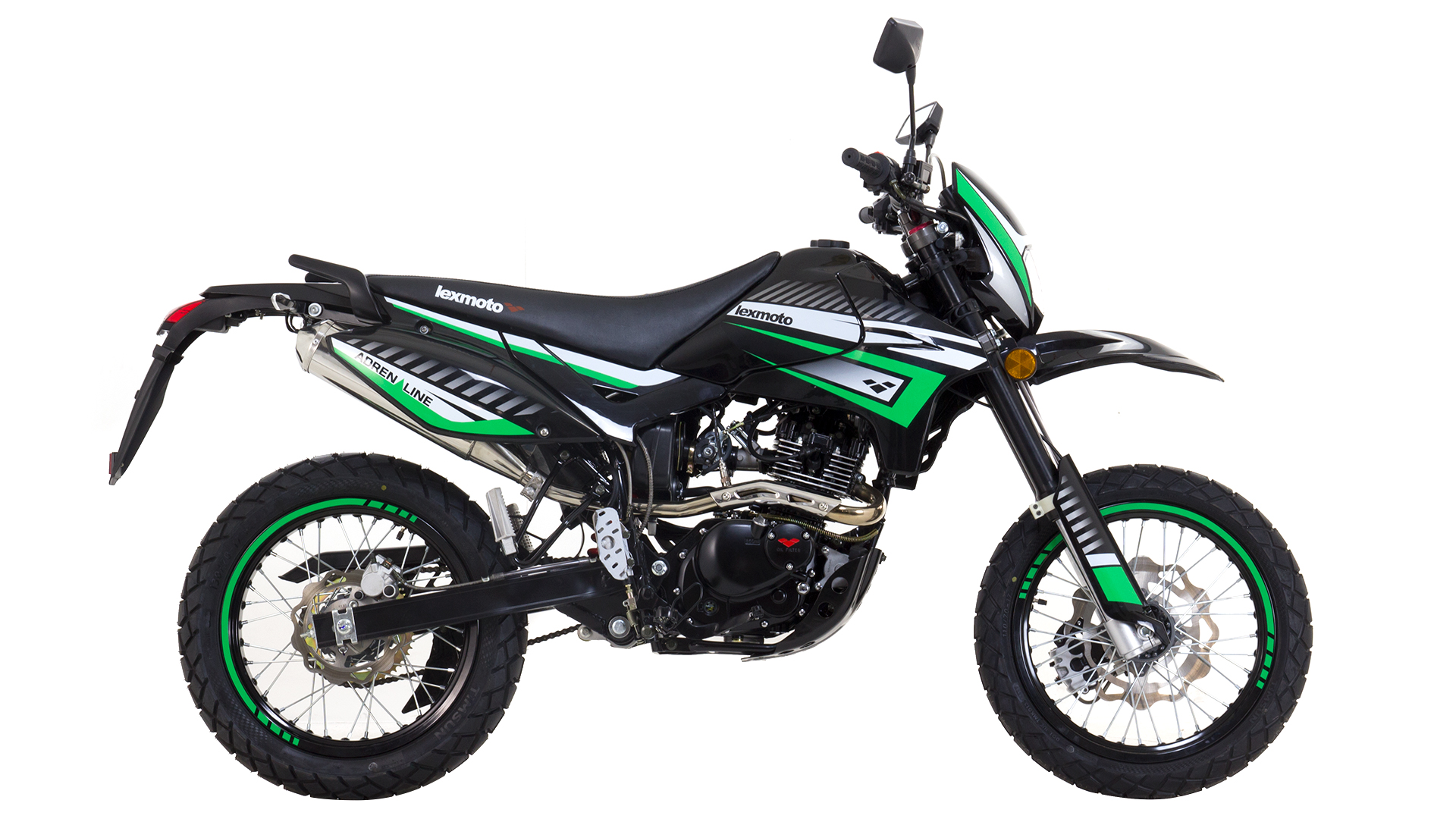 AJS is one of the oldest names in British bike manufacturing and the Cadwell is the ultimate 125 cafe racer that’s good to look at with heritage dating back to 1909. AJS does have a distinct heritage and quality, however, this bike is now produced in China. This should not take away from the retro style look from the 1960s that the Cadwell expresses with 9.2bhp. A lack of power compared to many other 125s available on the market, but the AJS Cadwell does offer one of the coolest, best looking bikes around with a stunning old school gold-black finish that will get any bystanders turning their heads as you ‘roar’ past.

The Sinnis Hoodlum is designed for those that are looking to stand out from the crowd, arrive in style and comfort. With the Hoodlum, it's not about how fast you get there, it's how you get there. Great for trips down to the coast, laid back and comfy, enjoying the ride - the Hoodlum is the ultimate cruiser. 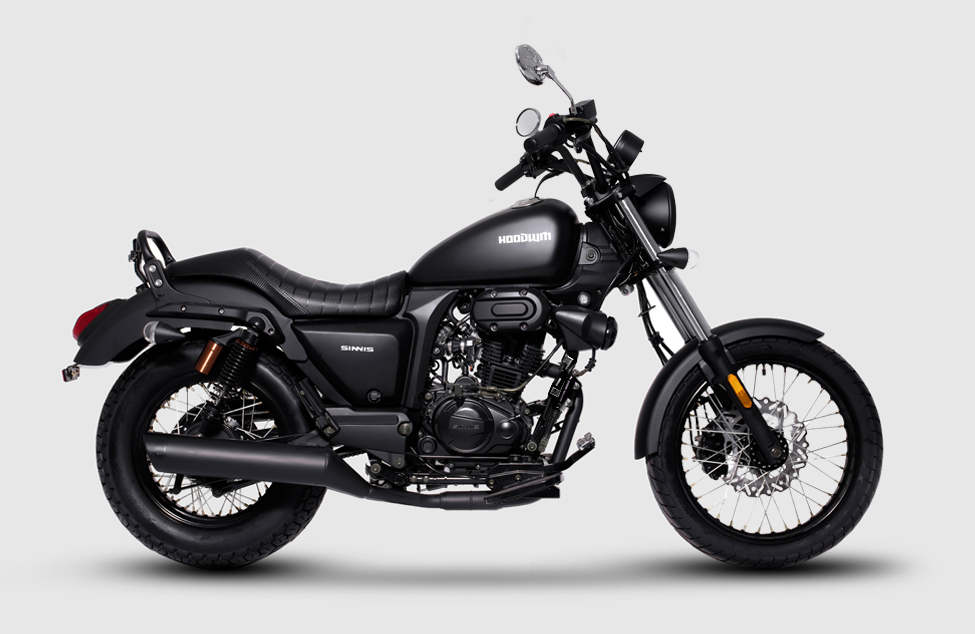 Whatever you are looking for whether it's speed, comfort or style you will be able to find it on a CBT certificate. The first step is to get your CBT Training booked in. RideTo is the UK #1 motorcycle training platform and with over 130 locations, we will be able to find training near you.

What Training Do I Need?

What Bike Should I Get?